Let’s face it, in this time of COVID-19 and stay at home orders, we could all use a good laugh. That’s the mindset Conor Moore is going with these days. After seeing his golf impersonations register over 50 million views on social media, the Irish actor and comedian was on the brink of seeing his big break playout. ‘The Conor Moore Show’ was set to debut on Golf Channel, broadcasted around the world from the network’s state of the art studios in Orlando. And then the coronavirus pandemic hit.

Not to be deterred, Moore and Golf Channel decided to stay the course and launch the show … from Conor’s apartment. We recently caught up with Moore who talked about the challenges of performing a one-man show from home, his favorite and toughest golfers to impersonate and what Tiger Woods said the first time he heard Conor’s impression of him.

Ryan Asselta: Your new show “The Conor Moore Show” debuted on April 14th on Golf Channel’s GOLF PASS, a little differently than you probably anticipated. Instead of a studio, you did the show from your kitchen because of COVID-19. Was this how you envisioned launching a new show?

Conor Moore: Uh, no. When I came over I didn’t know what to expect. When I got into the Golf Channel and I seen the studio and stuff, I was completely blown away. You know, I started this about four years ago on my mobile phone and then I was standing there in a studio with a production team and we were all very excited for it. Then obviously COVID-19 occurred and we’re kind of locked away in the house. I didn’t know whether we were going to go ahead with the show. But the guys at Golf Channel and GOLFPASS were like, ‘Now’s the time. We need a bit of humor to lighten the mood.’

They asked me if I could do it from my apartment? I’ve made all my own stuff for three years. Everywhere I’ve gone, I bought a green screen and I buy lights, New York, Dublin. I had the equipment, so now my apartment is the new Golf Channel HQ!

RA: In your first episode you had a Zoom chat where you impersonated six different tour pros, all filmed in your apartment. How tough was that to put together?

CM: That was actually one of the easier ones. When we recorded all of that we did it on the laptop because, well it’s a Zoom call. We wanted it to sound and look authentic. That was one of the quicker sketches to do. Next week we’re getting a bit more creative. We’ll have a court case going on with Matthew McConaughey and Tiger Woods. That will be a bit more complicated, but at home it’s not too hard. There’s been no distractions.

For the first time I’ve got a team and some help with the writing. They’re brilliant. We definitely have some good stuff happening as well. If you look on Instagram, Ian Poulter is keeping us entertained, Lee Westwood is body building. There’s plenty of stuff we can find that we can make fun of.

News
You gotta hear his Sergio! Meet the Irish golf impressionist who has everyone talking (and laughing)

RA: How did you get into doing golf impersonations?

CM: I wasn’t the guy that was doing impersonations for years or anything. I just did one video a few years ago, very randomly. There were a couple of guys in Ireland I was doing. I was picking guys in Irish sports, then I went into soccer. I picked Jurgen Klopp and Pep Guardiola and other soccer team managers.

My Dad was the captain of my local golf club, back home. And he would ask me to do gigs at the club and he said ‘Instead of doing all of those Irish guys, what about doing golfers?’ I thought, no one does golf so I tried it in 2018. I did it in January and decided to wait to drop the video until April and the weekend of the Masters. So I waited until the Masters and I put out the video and literally within about three weeks I was in Orlando and I’m sitting over at Golf Channel talking strategy with them. 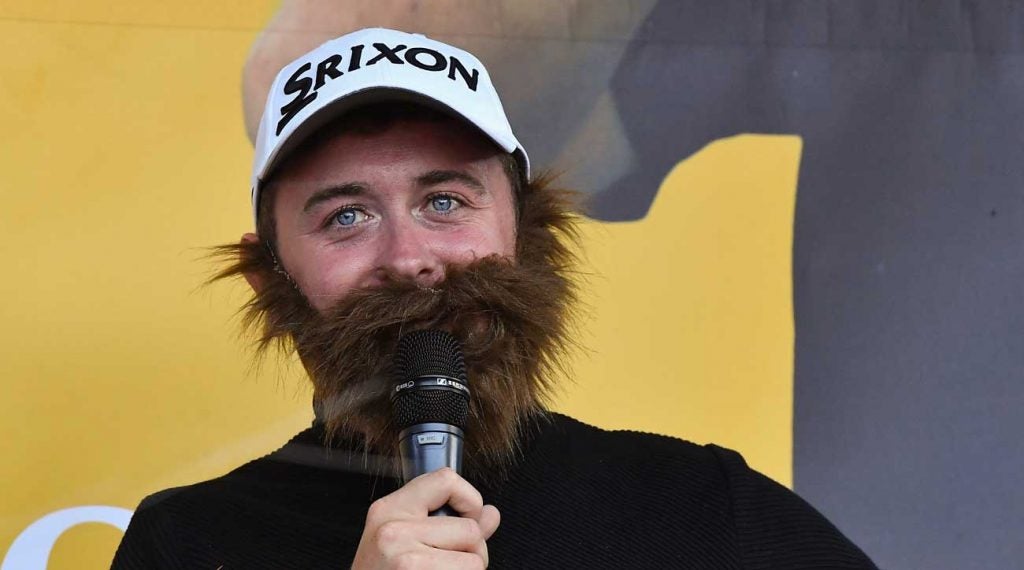 RA: Who’s the toughest golfer for you to impersonate?

CM: When I started out, I found Tiger really hard to do. And then one day I just got really focused for like five days. I nearly didn’t have him in my first video because I had kind of given up. I remember I heard him say ‘The conditions are really tough out there,’ and I noticed his jaw doesn’t move. I was laying on my bed just looking at him and all of a sudden I thought ‘I’ve got it!’ That took five days.

RA: Is there anyone new you’re working on?

CM: Right now I’m kind of stuck on Phil Mickelson and Jack Nicklaus. It’s taking some training. It would be great to get Jack because who wouldn’t want to see Jack and Tiger going at it right? My Phil Mickelson is at like a six right now, which is not good enough. Maybe a seven. He’s just hard to call. I’d say Gary Player is my personal favorite.

RA: You shot a Bridgestone Golf commercial with Tiger. How was he when you met him?

CM: Every time I did my impression he just kept laughing. When I walked in, I didn’t think he’d be right there at the door. And I walk in, he’s just there, he’s wearing a red shirt. It couldn’t be any more intimidating. After a couple of minutes he just looks at me and says, ‘Alright, do your impression of me,’

So I braced myself and said, ‘Well, I thought I putted well, but the conditions were really tough out there.’ And he just looks at me and says ‘Goddamn, you sound just like me!’

RA: How do most of the Tour players respond when they finally meet you?

CM: I’ve gotten to meet a lot of the guys. Rory, Shane Lowry, Sergio, Ian Poulter, and they’re all just incredibly nice fellows. They all just laugh at me when they see me. Thankfully they all enjoy it and I think that’s important for me. When I’m doing these, I like to think that everyone’s laughing at it. We’re all laughing together. So far, so good.