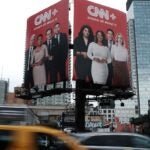 The stunning collapse of CNN+ stirred warnings about the dangers of streaming, but not for the PGA Tour.

There are many ways to decipher CNN+’s spectacular (and sudden) descent, but only one way of interpreting the outcome: an utter failure.

CNN+ has been propped up as many things in the few weeks since it first went live in early April. First, it was the wave of the future — a new, well-funded player in the streaming space who’d poached star anchors from rival networks and hired away behind-the-scenes talent by the fistful. A few days later, it was a growth project facing a long road toward building the subscribership needed to sustain its billion-dollar budget. Then, just a few days after that, it was all over.

When executives for the fledgling service’s new owners, Discovery Media, shuttered its doors just weeks after its inception, CNN+ became something else entirely. It was a warning sign of the dangers of the streaming world, some argued. To others, the service was a pawn in a complicated game of corporate chess. But over in Ponte Vedra Beach, PGA Tour executives likely took the news as something else entirely: an enormous sigh of relief.

For the Tour, the failure of CNN+ should serve, if nothing else, as proof its decision to sell its streaming rights to ESPN+ was the right one.

It was only three years ago that the future of PGA Tour streaming remained firmly in the balance. For years, the Tour owned its own streaming rights — called “PGA Tour Live” — which it sold as a standalone subscription service through NBC Sports Gold. But as Tour executives negotiated the latest round of rights deals, that position came into flux.

At the core of the issue was money. The Tour’s new batch of deals would be the first negotiated without Tiger Woods’ expected presence. In order to recoup the value lost without Tiger, Tour officials worked hard to bolster their bottom line: expanding the schedule and readjusting the Tour’s playoff format, among other changes. Streaming presented a lay-up opportunity to add an influx of cash. With the streaming market expected to explode in the next decade, a “handful” of players were interested in purchasing the Tour’s streaming rights, according to a source.

But with streaming so untapped, some within the Tour were reluctant to sell the rights to a traditional partner. Viewers were rewiring their habits in the streaming age, and for the content creators, that presented an opportunity to rewrite the rules. With so much of the sports streaming industry still in its infancy, the Tour could play a role in shaping it.

“In the world of streaming, there’s Amazon and Netflix on one hand, then there’s Peacock and Paramount Plus on the other,” says Ed Desser, a sports media rights consultant. “Those are two very, very different things. Now, in all cases, you’re dealing with fairly deep-pocketed companies. But Amazon and Netflix are companies with trillion dollar valuations. CBS, Viacom, and Fox, for that matter, have tens of billions in valuation. So, none of those are really upstarts. But there’s a component of the extent to which somebody is actually going to be able to deliver on their promises.”

Eventually, the Tour sided with safety, agreeing to terms with ESPN on a nine-year deal worth more than $1 billion. The agreement would not only allow ESPN to take over PGA Tour Live, but also see the worldwide leader bundle PGA Tour coverage as part of its ESPN+ offering. The deal dramatically shifted the way PGA Tour streaming was offered — allowing the product to reach a passive audience instead of flowing directly to the consumer. The Tour had passed on the opportunity to rebuild the streaming world, but expanded its audience and reach in the process.

Over at CNN+, audience and reach were two of its new owners’ biggest concerns. To Discovery, the service was too small and too specific to survive in a streaming world built increasingly upon bundled options. The New York Times reported that after failures in other niche-ified streaming services (including its Tiger Woods-centered GolfTV offering), Discovery executives had little appetite for another standalone option.

“We have failed almost at every turn launching these products,” JB Perrette, Discovery’s global head of streaming, reportedly said in a meeting.

There was another issue, too: leadership. CNN+ had been built by the network’s previous owners, WarnerMedia, and championed by its previous chief executive, Jeff Zucker. Within weeks of launch day, neither party was responsible for keeping it upright. Zucker (who departed the company amid accusations of inappropriate behavior) and WarnerMedia (who merged with Discovery) left CNN+ on an island without the necessary internal support to survive.

Ultimately, it was too much to overcome. Just two weeks after launch, Discovery chief executive David Zaslav made the decision to shutter CNN+ effective April 30. Some of the platform would be absorbed into Discovery’s larger streaming package and CNN’s linear programming, but most of it would be dissolved outright.

In a rapidly proliferating streaming landscape, CNN+ and the PGA Tour represent opposing sides of the same story. In CNN+, the Tour sees a vision of its past; in ESPN+, a vision of its future. It’s a future without the trappings of complete control and content ownership, but a future that has already provided the largest purses and biggest payouts in Tour history.

For the PGA Tour, the CNN+ debacle is an extreme example of what could have been, and a touchstone for all the ways in which the ESPN deal has benefitted them. The Tour finds itself at the center of plenty of broadcast-centered controversies, but it deserves kudos for doing that much — and making a boatload of cash in the process.