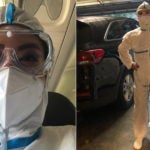 Christina Kim has ready for her flight.

Christina Kim had a long travel day on Monday. She was prepared.

The LPGA veteran was on her way to Toledo, Ohio, for the LPGA Drive on Championship, the LPGA’s first event since it paused for the coronavirus pandemic in March. After a 4 a.m. wake-up call, Kim posted on Twitter she was excited to start her journey to Toledo. She said her body couldn’t take the 16-hour drive she would have had ahead of her, so she chose to fly. Normal travel day? Hardly. These were her next two tweets:

While some people assumed this was a joke, it surely was not. Kim tweeted about her encounters and flight throughout the day — a quick stop in Charlotte before heading to Ohio — and responded to several people on Twitter. Some criticized her; others applauded her.

“If it’s jarring to you, that’s more a you problem than a me one,” she told one commenter. “I thought of it as being considerate to my fellow passengers, my caddie, my tour and to my family, whom I would have to quarantine with if I tested positive.”

Kim has gained additional public recognition as of late by dabbling as a PGA Tour analyst on PGA Tour Live, and her fresh, candid and humorous insights have received glowing reviews.

Now she’s back between the ropes herself beginning with the first round on Friday. Hazmat suit not required.