Check out the game’s most expensive shafts — only $16,800 to outfit your entire bag!

Seven Dreamers Laboratories, Inc. was founded with a stated mission of “creating things the world has never seen.”

The Japanese company has made breakthroughs in the fields of robotics and healthcare, and they’ve also created something else the world has never seen: a line of premium golf shafts starting at $1,200.

Those shafts are now available in North America.

Seven Dreamers insists that its manufacturing processes produce custom-built shafts for woods, irons and putters that outperform all others on the market. How? The company has its roots in the aerospace industry, and some of the same players involved in building the shafts were involved in the development of the “Hayabusa” spacecraft, the unmanned craft that Japan landed on an asteroid in 1998, which successfully returned to earth with a sample.

In a press release Monday afternoon, Seven Dreamers described its production method, which utilizes “aerospace-quality carbon fiber, a proprietary 3D design system and an autoclave to cure shafts.” Autoclaving is traditionally used in manufacturing high-precision carbon products and helps the carbon fiber retain its quality without adding “unnecessary resin and paint or polishing and grinding.”

The company offers 28 different bend profiles, which they identified as the most common through thousands of club fittings in Japan and Southeast Asia. Customers will find a shaft match by going through a custom fitting at an authorized dealer: Seven Dreamers sells its products through select retailers, club fitters and “high-profile” green-grass shops. The shafts debuted in Japan in 2014 and have been endorsed by Masashi “Jumbo” Ozaki, who won 94 times on the Japan Tour.

So, are you ready for Seven Dreamers? We’ll leave that up to you (and your bank account).

You can check out more of the shafts here. 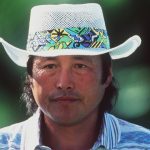 You may also like Before Hideki Matsuyama, There Was Jumbo Ozaki