Check out the 9 creepiest golf courses in the world, if you dare 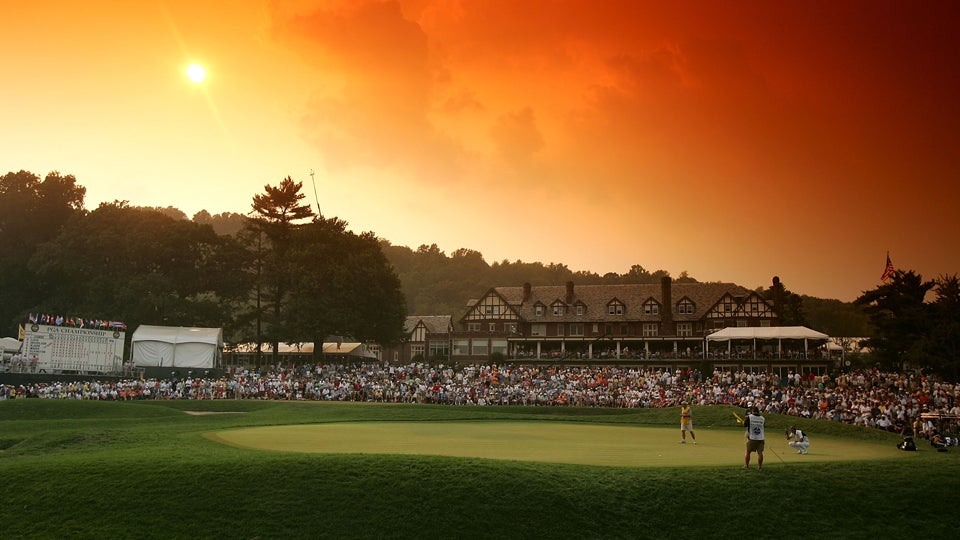 Baltusrol Golf Club was named after Baltus Roll, the man who farmed the land but was murdered by two thieves in 1831. He was found not far from the first tee of the seven-time U.S. Open venue.
Stuart Franklin/Getty Images

Halloween is upon us. Time to break out your Ghost putter, your orange glow balls and your favorite spooky stories from courses around the world. Here are nine of the most spooktacular.

From the back tees, the Lower Course at Baltusrol is brutal. So was the murder of the man the club was named for. In the middle of a frigid night in 1831, Baltus Roll, a farmer in his early 60s, was pulled from his bed by thieves, beaten, bound and left to freeze to death outside his home, which still stands a short skip from the first tee of the seven-time U.S. Open site. As the story goes, Annee Palmer was an English-born beauty and a sinister practitioner of “black magic” who did away with her first husband, John, then offed two subsequent spouses as well as several lovers during her reign as plantation mistress at the Rose Hall Great House. That was in the early 1800s. A championship golf course—the White Witch—now wraps around the grounds of the grand estate, but Annee’s ghost opts not to play it. It haunts the corridors of Rose Hall instead.

“The Legend of Sleepy Hollow,” by Washington Irving, gives life to the story of a headless horseman riding through the misty night of the New York countryside, across the very landscape where this Golden Age design now lies. Neat legend. Cool club logo, too.

Ask some longtime members and they’ll tell you the 13th hole of their parkland course is home to a mischievous apparition who makes off with their golf balls when they land in the fairway. One popular explanation is that birds are the real thieves. But a case of ectoplasmic kleptomania makes for a much better tale.

The 11th hole is known as Clooties Elbow, a nickname derived from the Gaelic word for devil. Over the years, countless golfers playing the mid-length par-pour have recounted feelings of terror and foreboding. There’ve been ghost sightings, too, but since those are hard to verify, we’ll settle on a story from the early 1930s, when the dead body of a young man who’d consumed poison was found prostrate on the green.

The supernatural story surrounding this layout springs from a long-ago tragic event. In the 1880s, a woman named Catherine Sutter was traveling through the region when her two children vanished. They were never found. Catherine died soon after, and some people have insisted that they’ve seen her apparition, wandering the golf course with a lantern in hand, continuing her desperate search.

The Fairmont Banff Springs is an elegant hotel that overlooks a celebrated Stanley Thompson layout. It is also a popular spot for weddings, not all of which have ended well. In the early 1930s, a bride in flowing gown was making her way down the hotel’s graceful limestone stairwell when she tripped and fell. There would be no honeymoon for her. In the decade since, accounts have surfaced of a spectral figure in a wedding dress, dancing alone in the hotel, her ghostly ingrate of a groom nowhere to be seen.

Tales of the supernatural seem to spring up everywhere around New Orleans. This public track is no exception. Some golfers have returned to the clubhouse, shaken, insisting they’ve heard screams, emanating on the fairways from disembodied voices. Others claim to have seen a ghostly figure standing sentinel behind the 18th green, an apparition some believe to be that of a former caddy named Blackie Pustiano, who looped for the great Harry Cooper in the 1930s.

Late one night in 1936, a nurse named Doris Gravlin ambled out onto this sandbelt course to meet with her estranged husband, Victor. She was never seen again. But her spiritual form has been spotted plenty. Some who’ve spied her say that she’s like Casper, a friendly ghost. But others insist that she’s grown more menacing over the years.