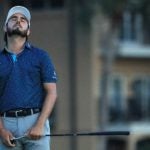 Abraham Ancer found himself in rarified air Sunday for all the wrong reasons. By almost every metric, Ancer was the best golfer in the field, but by the only metric that mattered, he was not.

The 29-year-old played all week at the RBC Heritage like his hair was on fire. Ancer shot four rounds in the 60s and three consecutive rounds of 65 or better to close out the weekend. He made 65 of 72 of greens in regulation (or more than 90 percent, the most-ever at Harbour Town). He entered the final round of play tied for the lead and shot six under in the final pairing. His cumulative score of 21 under par for the week bested the tournament record set by Brian Gay in 2009.

Yet as he tapped in his par putt to close out a final-round 65, he bore the frustration of someone who’d shot in the 80s. He’d been bested…again. Webb Simpson shot a final-round 64 in the group ahead of Ancer, eclipsing his record-setting performance by a single stroke and claiming the win.

Shortly after Simpson closed out the victory, Ancer resurfaced on one of golf’s most unenviable shortlists: the best player without a PGA Tour win. For years, the “best non-winner” debate remained largely subjective (and hell, it still is). But in the age of analytics, the good folks at Data Golf have harnessed data to provide us with a more accurate lens for making the argument.

While Ancer is still looking for the first victory of his PGA Tour career, Data Golf’s “expected wins” stat tells us his performance puts him on the shortlist of best golfers without a win this year.

In his 16 starts in 2020, Ancer is fourth among Tour players without a victory in “expected wins.” At just under one expected win (.98), he lands behind only Xander Schauffele, Bryson DeChambeau and Jon Rahm — a trio of top-15 golfers in the world — and ahead of names like Tony Finau, Collin Morikawa and Phil Mickelson.

Data Golf measures “expected wins” by comparing Strokes Gained performances against historical trends, factoring for the venue, year and field size, among other variables. Because Strokes Gained is a measurement of performance relative to the field (rather than relative to par), it is less beholden to shifting trends like distance and course conditions.

While there’s a lot more that goes into a PGA Tour victory than Strokes Gained, the “expected wins” stat intends to provide us with a barometer for performance.

“Expected wins provide a means of quantifying the number of high-quality performances a golfer has had, while avoiding the noise that is built in to using number of wins for this purpose,” the Data Golf website says.

Ancer’s ranking is particularly interesting considering his elusive search for PGA Tour victory No. 1, but a few other names inform us who’s close to breaking through. Bryson — in all his beefed-up majesty — seems like he’s on the cusp of his first win of the year, especially after contending in each of the last two weeks purely on the weight (pun intended) of his driver. Xander Schauffele is already approaching 1.5 expected wins and Jon Rahm, in only nine starts, is third in expected wins.

If you’re interested, you can check out Data Golf’s full gamut of number-nerdness here, or read more about what goes into cultivating “expected wins” here.