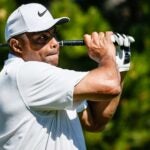 The Match: Champions for Change will feature special "Charles tees" on Friday.

It’s no secret that Charles Barkley isn’t a good golfer. His swing is famously bad, with a hitch so severe that it can be painful to watch. At times, it feels like a miracle that he even makes contact with the ball.

Despite his deficiencies, Barkley is an avid player. He spends a good amount of time in Arizona, where the golf season runs year-round, so he has plenty of opportunities to hone his game. And while he may never get back to being the player he was when he was in the NBA, his game has improved from rock bottom that it inhabited at one time.

Barkley’s affinity for golf (plus his excellent on-camera persona) has landed him a spot in The Match: Champions for Change on Friday as he teams up with Phil Mickelson to take on Steph Curry and Peyton Manning. Barkley is easily the highest handicap in the match, so he will get a distinct advantage — his own tee box. “He’s going to be playing from the Charles tees and they’re (going to be) slightly ahead of everybody else,” Mickelson detailed on a recent appearance on the Callaway Golf Podcast. “That’s going to open it up to some possibilities where he might not have to hit driver every hole.”

The Round Mound of Rebound is going to need all the help he can get after guaranteeing victory over Curry and Manning last week. And with a modified alternate shot format, Mickelson won’t be able to bail him out as easily if his game goes south.

But those “Charles tees” should give him enough advantage that he won’t embarrass himself too much.

“He could hit an iron that gets us in play and allows me to hit the approach shot.,” Mickelson said about their strategy. “I think that he’s a decent putter … He’s got a good touch, he’s always stroked the ball well in basketball and that type of touch in his hands comes through on the putter.”

The Match, which will be played at Stone Canyon Golf Club in Oro Valley, Ariz., airs this Friday on TNT at 3 p.m. ET. The event will also raise funds for diversity, equality and inclusion through donations to HBCUs while also raising awareness and highlighting diversity and equality in sports.