Why are major weeks so hard? This pro explains 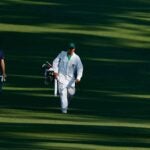 Carlos Ortiz wants to be a dawg. When the lights are brightest and the stages biggest, Ortiz wants to be the center of attention. His mindset is built around it, and perhaps just as importantly, so is his golf game.

The unfortunate news, as Ortiz told hosts Colt Knost and Drew Stoltz on this week’s episode of GOLF’s Subpar, is that all too often, when the lights have been brightest and the stages biggest, he hasn’t been a dawg.

“Honestly, I haven’t prepared the way I should. You’re like a little puppy, you’re so excited,” Ortiz said. “I get so excited when I’m at a major, I’m running around practicing, three practice rounds. By Thursday I’m like, ‘Damn I still have to play four more days, and I’m exhausted, I messed up.'”

The numbers back it up. In five of his seven career major starts, Ortiz hasn’t even reached the weekend. In his only two made-cuts, at the 2019 U.S. Open and 2021 PGA Championship, Ortiz finished T52 and T55, respectively.

Some of that is owed to poor performance. Some of it, though, is owed to the mental, physical and emotional grind that comes with surviving through a major championship week.

But there are no silver bullets in major championship golf. As with anything else in life, the best lessons are learned by doing.

“I think you just learn by playing them,” Ortiz said. “I definitely have not treated them how I should, I still don’t know what’s the right way, I definitely know what not to do now.”

As for letting the big dawg eat, so to speak, Ortiz says he’s closer than he’s ever been.

“I haven’t found what’s the perfect formula, I know it’s different for everybody but I have definitely overpracticed those weeks,” he said. “I feel those are the weeks the golf course is so hard, you have to be so rested and good in the head to be able to think your way around those golf courses, and I’ve been so exhausted by Thursday.”

To hear more from Ortiz, check out the video below.