Bunkers in Baghdad: How one charity is spreading joy (and golf) to soldiers around the world 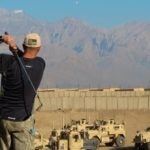 Bunkers in Baghdad has donated nearly 1 million clubs to troops stationed around the world.

Every so often, an idea is so preternaturally benevolent it succeeds without hesitation. Without warning, it is plucked from the stream of tribulation, failure and frustration through which most human endeavors flow and placed directly into the limelight.

In golf, such ideas aren’t thought to exist. Golf is unconquerable and imperfect — the very idea of success without repeated (and often painful) failure exists in conflict with the fabric of the sport.

That is, unless you’re Joe Hanna.

Eleven years ago, Hanna read an article in GOLF Magazine detailing David Feherty’s visit to soldiers stationed in Iraq and Kuwait. In the piece, Feherty noted how some members of the U.S. Military had taken to golf — creating makeshift driving ranges on army bases.

“After I read that article, I said, the least I can do is collect some golf balls and clubs and ship them overseas,” Hanna told GOLF.com. “That’s where the idea and concept for the charity came from.”

And so Hanna, who has no military background, founded Bunkers in Baghdad. The goal? Bring golf to soldiers stationed around the world.

“And here we are, eleven million golf balls later,” he laughs.

Right from the beginning, Bunkers in Baghdad’s success appeared preordained.

“When I came up with the idea, I put together a random postcard with some camouflage, some U.S. flags and some golf balls,” he said. “I probably sent out 500 of them, to golf companies, golfers, athletes, entertainers. Just surfing through the internet to try to get some support for this.”

To his surprise, the postcards worked. Hanna earned the attention of one of the industry’s biggest players before he’d even officially started the charity.

“On that first list that we sent out, we heard back from Callaway within the first seven days,” he laughed. “I’m just a 28-year-old kid who’s starting a non-profit hoping that people get back to us, and once somebody did get back to us, I thought it was the greatest thing in the world.”

After a meeting Hanna (who is a partner at the Buffalo, N.Y. law firm Goldberg Segalla) described as “both a cross-examination and a deposition,” Callaway joined the cause.

“The day that Callaway came on board we became legitimized as a non-profit,” Hanna said. “When you can go out to the world and say, ‘we are national partners with Callaway Golf,’ that’s pretty cool. I say this all the time, but we would not be here today without them.”

But even with Callaway’s help, shipping 11 million golf balls to the furthest corners of the planet isn’t as easy as it seems. There are customs forms to be filled out and shipping labels to be created. Much more pressingly, the charity needed to volunteers to find equipment, golf balls and soldiers ready to tee it up.

In other words, the perfect storm for youth outreach.

“There’s no better volunteer force than school children,” he said. “They have this uncanny ability to get whatever they want when they’re volunteering. They could ask for golf balls and reach out to golf courses, they could get us the names of the troops that we could use as our initial rolodex.”

Between the financial support provided by partners like Callaway and Hanna’s firm and human support from the community, Hanna needed to do little more than to sit back and watch as his cause took off.

To date, Bunkers in Baghdad has shipped more than 11 million golf balls and 850,000 golf clubs to soldiers stationed in 70 countries. Callaway has donated close to $1 million worth of equipment (and Hanna estimates countless more in marketing and press). Hanna says the foundation receives daily requests from active and former U.S. Military service members looking to bolster their golf game.

As the charity has grown, so has its outreach. Three former U.S. Presidents have pledged financial support, along with the likes of Jack Nicklaus, the late Arnold Palmer and Raymond Floyd. Hanna says most of the charity’s volunteers — the bedrock of fundraising efforts — come from more than 800 schools in 48 states. Many of the schools also participate in “Bunker Buddies,” a campaign that sends cards and notes of encouragement from children to soldiers.

“Not only are we instilling in these young men and women the importance of giving back, we’re sending a reminder of home to our troops,” he said. “Sometimes they’re more appreciative when they get the letters from the students than they are for the golf clubs.”

In his 11th year as president and cofounder, Hanna has never taken a salary, intent on putting every penny that comes into the charity back toward military men and women. It’s never been about the money anyway, he insists.

“I’ve never been accused of being terribly smart, but it’s a very simple concept,” Hanna said. “We’ve introduced the game of golf to thousands and thousands of people around the world.”

Those who wish to donate to Bunkers in Baghdad can do so through the link HERE.