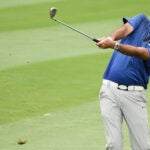 Bubba Watson hits an iron during the Zozo Championship in October.

A driver and one fairway wood are in the back of the bag. Six irons are in the middle, and four wedges and a putter are in the front. On the left of the bag, in a sleeve, is an umbrella. The driver and wood are covered by head covers with a pink label at the top that playfully reads “Please do not touch,” with “touch” in a slightly bigger font size. The putter is wrapped in a gold wrapping. Two of the wedges are stamped with the words “ Bubba’s Sweet Spot,” a nod to the candy and ice cream shop owned by Bubba Watson, who also owns the bag and clubs.

The eight irons are covered in iron covers.

“Got some new #ironcovers in the #PING bag… what do y’all think? Yes… No… Maybe? Thanks @pinggolfjapan!!@PingTour #PlayYourBest,” Watson wrote on his social media accounts on Thursday next to a photo of the gear.

That storm you hear is the pitter patter of keyboards of the iron cover commentary.

“There’s time to delete this,” wrote ben_bry on Instagram.

Watson would perhaps need to win a third green jacket — while walking on the waters of Rae’s Creek and holding a 96-inch driver — to get more folks to stop their social scroll.

For the cover lovers, the wraps work much like their driver cousins — they protect against dings and dents. For the cover haters, the accessory is just a bit unnecessary. They’re not new. They’re not old, either — pro Aaron Rai was spotted with them while winning the European Tour’s Scottish Open last year.

As were the comments. A sampling:

“Awesome. I would like to see these type of covers return. Have iron covers on mine and I think it makes the whole bag sharper!” wrote @davidrnichols on Watson’s tweet.

“Love them. I cover mine after every shot…can’t believe how people don’t take care of their clubs. They must not care how much clubs cost,” wrote Lori Rinehart on GOLF’s Facebook page.

“Somebody explain to me what is so wrong with Iron Covers. I am a 7 handicap and I walk a ton of golf. I hate my clubs clanking while walking and want to protect them. Why is this wrong? I guess driver/wood/hybrid covers are the next to go?” wrote aronkaiser on GOLF’s Instagram post.

“No, No, No……….Dude, nobody has won a 3rd Green Jacket with #ironcovers. They gotta go.” wrote @David_Coolican on Watson’s tweet.

“Oh god no! My handicap just went UP by looking at this!!!” wrote pilot_ericmcdougal on Watson’s Instagram post.

“When I first started I bought some and my friends I play with said if you ever use those again you will be playing alone,” wrote Geep Terranova on GOLF’s Facebook post.

“The sound of your irons clinging together in harmony is priceless,” Thomas J Fisher wrote on GOLF’s Facebook post.

My grandpa, who bought me my first set of clubs, had a set of red, plastic iron covers, with the numbers written in white. So I’ve always had a soft spot for them. But I go without. I hit my clubs too many times on holes to cover and uncover them.