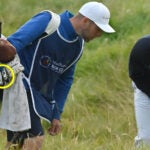 You'll almost never see a tour pro with covers on their irons.

Aaron Rai held off Tommy Fleetwood to win the Scottish Open for his second European Tour title. It’s important to point this out because Rai, at just 25, has a bright future ahead. He’s not defined by the gear in his bag. That said, it’s impossible to look at Rai’s bag setup and not mention the obvious gear accessory outlier rarely seen in the professional ranks.

The accessory is a set of worn iron covers currently protecting his Tiger Woods-designed TaylorMade P7TW blades. If you’re unfamiliar with the covers, some golfers prefer to use them to keep their sticks from picking up unwanted dents and dings. Forged from a soft 1025 carbon steel, the P7TW is prone to picking up “bag chatter” when the heads bang against each other. Some don’t have a problem with the worn look. Others want to keep them pristine.

What’s interesting about Rai’s cover usage is this isn’t something that started with the special Tiger irons. When Rai won for the first time on the European Tour in 2018, his Tour Preferred MB irons were hidden by a set of red and black TaylorMade covers that had seen better days. Based on photos from the Scottish Open, Rai has since moved on to a black and white cover set.

It’s still unclear why Rai plays a set of irons with covers, but considering Woods’ irons were a limited release, we’re going assume he’s keeping them in good shape due to their scarcity. Another question that needs answering: Why did he (or most likely his caddie) cross out the “L” and “P” and write a 7 and 8 in Sharpie? Did the 7- and 8-iron covers go missing?

And for those hoping to pick up a set of these covers online, they can actually be had for a reasonable price. A recent eBay search turned up a set that went for $24 dollars on the open market. Just be aware: TaylorMade doesn’t make iron covers — as far as this scribe can tell — meaning there’s a chance these are of the knock-off variety, which only makes them even more fascinating.

Who knew iron covers would wind up being the top gear story from past week.

Back and better than ever

Following the 11th PGA Tour title of his career, Sergio Garcia was asked to pick the better shot: Was it the 260-yard 3-wood on 14 that vaulted him into a tie for the lead late on Sunday afternoon or the 171-yard dart to 2 feet, 6 inches on the closing hole? Without either shot, we’re likely not talking about a Garcia win, which is why he refrained from making a final answer. Both were critically important. But there’s something extra special about the approach on 18.

As Garcia revealed during his post-round press conference, he used the same club (8-iron) to set up a tournament-defining eagle on 15 during the 2017 Masters, and again on Sunday on the final hole at the Sanderson Farms Championship.

Garcia recently swapped Ping’s Blueprint irons for a set of TaylorMade P7MB’s at the U.S. Open, but the run didn’t last long. Garcia returned to Blueprint in Mississippi, where he ranked third in Strokes Gained: Approach-the-Green, picking up more than seven shots on the field.

Bryson DeChambeau wasn’t in the Sanderson field, but it’s still worth bringing up an interesting bit of gear minutiae that pertains to his Cobra driver. If you missed the story, DeChambeau switched drivers during the final round of the U.S. Open. The story took many by surprise.

In actuality, this is a fairly standard equipment change for the newly minted major winner, who routinely rotates between driver heads — all while using the same shaft — depending on which one feels right. All of the heads range in loft from 5.25 to 5.75 degrees. How do you tell 4 or 5 nearly identical heads apart? If you’re DeChambeau, you use a label maker. Smart man.

Emiliano Grillo is one of a handful of players using Callaway’s Apex MB prototype irons. With launch season just around the corner, this is one product to watch. The screw in the back of the head is an intriguing addition.

Cameron Davis made the jump to Titleist’s TSi3 driver in Mississippi and found more spin, thanks in large part to more loft. The Aussie went from 9.5 degrees (TS3) to 10 degrees and made tweaks to the hosel setting (D2 instead of A2) and shaft (UST Lin-Q Gunmetal). He also adjusted the CG setting to H2. The end result was a driver that launched higher for additional hang time and carry. “[T]he higher loft helped him with increased spin and start line,” said Titleist Tour rep Larry Silveira.