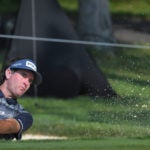 Bubba Watson hits out of the sand during the Workday Charity Open at Muirfield Village Golf Club.

The Golden Bear Club at Muirfield Village Golf Club was closed this year. No fans at either the Workday Charity Open two weeks ago or the Memorial last week. No need for the Golden Bear Club’s food and beverage tents.

Bubba Watson got in.

During the second round of the Workday, the par-4 14th was playing 318 yards. Watson’s drive went 384. The PGA Tour’s data site does not even show where it lands. The Tour’s website says it went to “unknown.”

The yellow ball was about 3 yards away from a green picnic bench.

Watson’s caddie, Ted Scott, said the ball hit the cart part to the left of the green, took a bounce and went in the club. Watson and Scott went in, too.

Watson played it from there.

He played it to within 14 feet.

“Total guesstimate yardage, total guesstimate pin direction, green slopes away about 4%,” Scott wrote on Instagram. “@bubbawatson hits a ridiculous recovery that lands pin hi somehow and rips back to 25 feet. How does he do this nonsense #Freakshow#workdaycharityopen #pgatour.”

Watson two-putted for par, narrowly missing the birdie putt. He finished 1-over for his round and 8-over over his two rounds and missed the cut.

The ball was likely done, too. Scott showed on Instagram that it had a large black scuff on it.

“Love watching the freak show every time I get the chance!” Tony Finau wrote on the Instagram post. “One of the best duos in the game.”