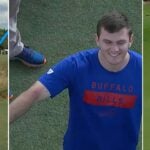 Bubba Watson has this fan to thank for driving the par-4 13th green on Friday at the QBE Shootout.

Despite his slender frame, Bubba Watson is one of the modern PGA Tour’s original long-bombers. On Friday at the 2021 QBE Shootout, Watson put his power on full display, and one fan has a big, red welt to remember it by.

Watson is playing the QBE alongside LPGA star Lexi Thompson, and the pair put on a show in the opening-round scramble, especially Lexi, whose blazing hot putting streak left Bubba searching for a rules official.

Bubba’s prowess is much more apparent on the tee then on the green, and at the par-4 13th hole, Watson got a chance to show off his extreme length. With the hole playing around 320 yards, Watson wound up with his pink Ping driver and smashed a drive toward the putting surface in an attempt to drive the green.

But the drive was offline, and instead of slamming into the short grass, it slammed into the arm of a fan standing in the greenside gallery.

Fortunately for Bubba, after hitting the fan, his ball deflected onto the green, rolling directly toward the hole and nearly into the cup for an ultra-rare par-4 ace. Check it out below.

The good news is, everything worked out for both parties involved in the incident. Watson took advantage of his lucky bounce and rolled in the putt for an eagle, but only after removing his glove, signing it, and handing it to the fan he hit.

Watson and Thompson finished the first round at 13 under and begin Round 2 trailing by three shots.