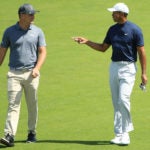 How do you get a practice round with Tiger Woods?

And what do you talk about once you’re out there?

After Tiger Woods finished the front nine at Muirfield Village, which he played Wednesday morning alongside Bryson DeChambeau, he was mum about their on-course chats — and denied he’d spent much time asking DeChambeau about his newly famous physique.

“I never asked and we didn’t really talk about it,” Woods said during brief post-round remarks. “We talked about a lot of other different things and just had a normal practice round.”

But what Woods and DeChambeau would consider a “normal practice round” is, of course, plenty interesting to golf fans eager to see the 15-time major champ back in action — particularly given he was tuning up alongside DeChambeau, who gets plenty of his own attention these days.

Luckily DeChambeau, who called it “an honor” to play with Woods again, was a little more forthcoming in his press conference a short time later. He even sort of answered the question about how he gets to spend certain Tuesdays and Wednesdays on Tour in Woods’ group. DeChambeau said that while he didn’t want to get into too much detail about the process, he’s usually the one who does the asking.

“Whenever we play, I usually ask kindly. That’s the way it kind of goes about,” he said. Woods is undoubtedly impressed by DeChambeau’s distance gains and run of consistent play (“What Bryson has done is no easy task,” he marveled on Tuesday), but it was still DeChambeau who made the effort to learn from Woods on Wednesday, rather than the other way around.

“It was more of me wanting to see what he was doing, to be honest with you,” DeChambeau said. “I’m always interested to see what new things he’s doing. And I think it was mutual. Obviously he likes playing with me. We’ve had a great relationship. We have great conversations. So it was just mutually beneficial, I think, and we had a lot of fun.”

In other words, you can get on Tiger’s tee sheet if you ask nicely, as long as you’re Bryson DeChambeau.

DeChambeau has become one of Woods’ most frequent playing partners. The two played together during the lead-up to last year’s U.S. Open, Memorial, and Players Championships, among other events. Justin Thomas, who played the back nine with Woods on Tuesday, is perhaps his next most frequent practice-round companion. While Memorial Wednesdays are typically reserved for a pro-am (often with Woods and Peyton Manning grouped together) there are no in-person pro-ams at the moment, leaving Woods with an open schedule.

On the first hole Wednesday, DeChambeau said, he piped his tee shot over the right bunker and into the fairway, leaving Woods to smile.

“He’s like, I didn’t get that number for that bunker,” DeChambeau said.

A couple reporters walking with the pair noted the pair’s respective length off the tee. Golf Channel’s Ryan Lavner noted that DeChambeau was 50 yards past Woods on No. 6. But for the most part, DeChambeau said that Woods stayed focused on his own preparation.

“He’s worried about winning the tournament this week just like I am, and he’s pretty good at protecting himself from anything that could be potentially — I don’t know. He’s really, really good at keeping to himself.”

On a basic level, DeChambeau is still giddy to be playing with Woods, who was a big part of his his childhood golf inspiration.

“Back in the day, he was it. He was the golden star. He was the one everybody looked up to. I can tell you that the junior golfers that I played with were all inspired by Tiger and how far he hit it and how he dominated tournaments,” DeChambeau said. “I was aware of it every single week he played because I watched in just complete awe, going, man, how is he doing this?”

Now that the two are peers, there are aspects of the relationship DeChambeau would like to keep secret.

“He played a couple jokes on me today, just messing with me. I’ll keep it personal, though,” he said. Still, DeChambeau may have gotten the last laugh with one backhanded compliment.