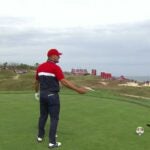 Bryson DeChambeau talks to the gallery on the 6th tee at Whistling Straits.

Bryson DeChambeau’s head-turning cuts and mammoth drives have been the talk of the PGA Tour for much of the past year, and that trend has continued at the Ryder Cup this week.

On Monday, he’s competing in the World Long Drive Championships in just a few days, and ahead of this week’s event, he’s been open about how he’s tried to prepare for both. Over the past three days, hIs driver has again been a big weapon, and the partisan U.S. crowd has roared every time he’s pulled it, especially on the few short par-4s at Whistling Straits. On Sunday, he pulled off the shot of the day when he became the first player all week to drive the green on the par-4 1st hole, and he even punctuated it by draining his putt for eagle to go 1 up against Sergio Garcia.

The next short par-4 DeChambeau reached was the 6th hole, which played 339 yards on Sunday. DeChambeau stood on the tee and discussed the shot with this caddie, Brian Zeigler, and Zeigler told him he thought 3-wood, not driver, was the right play. DeChambeau agreed, handed Zeigler the driver and adjusted the height of his tee. The crowd, noticing the change, groaned. As Zeigler handed DeChambeau the 3-wood, DeChambeau looked at the gallery, smiled and yelled, “Guys, I’m still going for the green! Calm down.”

The fans, and TV broadcast team, roared in laughter.

It was the right call by Zeigler, as DeChambeau launched it 341 yards down the fairway and had an easy chip for eagle. He missed the birdie putt and tied Garcia with a par, but DeChambeau birdied the 7th to go 2 up in their match.

You can follow all of the final-day action at the Ryder Cup here.