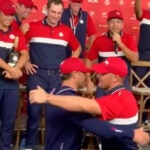 The haymakers are officially flying ahead of the post-Thanksgiving grudge match between Bryson DeChambeau and Brooks Koepka. For all the talk about an armistice in the feud between the two stars, recent comments from both prove there’s still a lot of fire in their rivalry, and certainly no love lost.

While the feud carried on for over a year with seemingly no end in sight, DeChambeau and Koepka’s appearance as teammates on the winning U.S. Ryder Cup team — and their civil behavior toward each other during the event — seemed to suggest their personal problems had been ironed out.

In one viral moment at Whistling Straits, the two stars literally hugged it out to show everyone that their fight was over.

But it turns out neither player thought that “hug” was as meaningful as it was made out to be.

“It was definitely a little forced,” DeChambeau told reporters on a conference call for The Match. “The team wanted us to do it, and to be honest I was surprised he did it. But I’m a guy that can put things behind me pretty quickly when you apologize and then we can move along. But it definitely felt forced, there wasn’t an apology or anything like that. Until I get an apology for what he’s said and what not, nothing will change.”

Bryson didn’t mince words when describing how Koepka has treated him over the past year.

“It’s disgusting the way the guy has tried to knock me down. There’s no need for it in the game of golf,” DeChambeau said. “He’s just tried to knock me down at every angle, every avenue. For what reason, I don’t know. Maybe it’s because he’s jealous and wants to get a part of that PIP money from the tour. That’s probably a part of it, because it was squashed until that was announced.”

At least on the topic of the Ryder Cup “hug heard ’round the world,” Koepka and DeChambeau have some common ground. On the same conference call, Koepka said, “I wouldn’t put much on a forced hug.”

Hopefully the two players are saving at least some of their best trash talk for the course. The Match kicks off Friday, November 26, at the Wynn Golf Club in Las Vegas. Fans can follow along live on TNT.