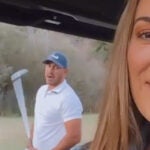 There was dating advice: “One of the secrets to success in our relationship is time apart,” Jena Sims said of boyfriend Brooks Koepka.

There was some playful back-and-forth: “There is no athleticism on that side of the golf cart,” Koepka told Sims.

There was Koepka rejoicing in his equipment free agency: “The freedom! I don’t have to be tied down or locked down.”

And there was the admission that this southern boy — and Florida St. grad, no less! — has never shot a gun. “I’ve never shot anything,” he said.

In the meantime, Koepka was reeling off birdies and eagles in the background; Sims documented Koepka’s run of 7 under through 8 holes.

But the most interesting moment from Mondays impromptu Instagram Q&A with Koepka (he of the 838,000 followers) and Sims (who boasts 205,000 of her own) came when Koepka was asked his advice for junior golfers learning the game.

It’s not exactly shocking advice; we’ve heard this refrain from other players, from Top 100 Teachers and from golf’s new Prince of Distance, Bryson DeChambeau. But it’s still particularly striking to hear it from Koepka, who has won more majors than anyone in golf over the last five years. Golf’s latest distance race has everyone thinking about speed, speed, speed — to the point where it’s a pre-requisite and top priority for any golfer who wants to be competitive.

Koepka himself swings it plenty fast; he’s been in the top 10 on the PGA Tour in club head speed every year he’s been healthy (2014-2019) and regularly swings it in the mid-120s. He’s been oft-cited as the prototype for the “modern golfer;” he’s stronger, more athletic and bigger-bombing than golfers were a generation before. When he won at Erin Hills in 2017, it felt like Koepka was ushering in golf’s modern era.

But the idea of speed at a young age is nothing new. Jack Nicklaus grew up crushing the ball. And Koepka’s advice — hit it as far as you can, but find the club face — calls to mind the advice given to another young golfer: Tiger Woods. Tiger’s father Earl told him that he could (and should!) swing as hard as he wanted provided he finished his swing in balance.

That turned out pretty well for him.

In summation, Koepka’s advice for junior golfers is so interesting because it’s so matter-of-fact. It’s irrefutable. Kids who want to become serious competitive golfers should be swinging hard, because we know now more than the advantage that length brings.

It was a particularly earnest moment in a Q&A that covered the spectrum from funny to honest to relatable to cheeky (literally, but you can watch for more on that). It was a good look at Koepka, three-dimensional human and real-life boyfriend. And the oh-by-the-way five birdies and an eagle were another reminder: this guy’s going to be back for the Masters.

There was one other question that stuck out, too: “Why the meathead narcissistic persona?” The fact that Koepka chose to field the question was telling, as was his response:

All these questions later, we’ve got some good advice — but we still don’t have Koepka quite figured out.