Brooks Koepka had a hilariously honest reaction to his Masters performance 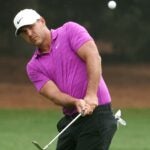 Brooks Koepka was less than pleased with his Masters performance.

Depending on whom you ask, Brooks Koepka’s candor is either endearing or arrogant. Some see it as a refreshing change of pace from the canned responses that are all too common in professional golf. Others view it as inauthentic bravado that has no place in the game.

Koepka’s relentless honesty came out yet again in Augusta this week. After a Masters appearance in which he saw Dustin Johnson claim his first green jacket, Koepka was not in the best of moods.

“I’m not really excited right now,” he said after his final-round 70. “Whoo, seventh. I don’t know what else to say to that. I’m not too happy.” Some players would be thrilled with a top-10 showing in a major — especially after a year of struggles. Koepka, not so much. For a man who has made it clear that he prioritizes winning majors above all else, leaving the Masters empty-handed is unacceptable.

Having to witness Johnson summit the Masters mountain before him might have added to the sting. What was once a buddy-buddy relationship between the two has seemingly morphed into a rivalry. Koepka even went so far as to jab at Johnson’s sparse major total at the PGA Championship earlier this year.

“I like my chances,” Koepka said about chasing down Johnson at Harding Park. “When I’ve been in this position before, I’ve capitalized. I don’t know, [Johnson’s] only won one. I’m playing good. I don’t know, we’ll see.”

That comment ended up blowing up in Koepka’s face as he limped (literally) to a 74 and eventual T29 finish. This time around, Koepka was once again looking up at Johnson on the leaderboard. Koepka was on the borderline of contention heading into the final round, but with Johnson playing some of the best golf in the world, no one had a chance at catching him.

Koepka also mentioned that the soft conditions made it more difficult on him to make enough birdies. With the soft ground, it was advantageous to be able to pick the ball off the turf with your strike, as Johnson does so well.

“I didn’t play very good, but, you know, just didn’t make any putts, missed it in a lot of bad spots, and didn’t even come close to making enough birdies,” Koepka said. “It suited him right down to the ground. That’s why he’s going to win.”

No matter the excuse, the result remains the same with Johnson claiming a green jacket before his counterpart. It’s sure to only add to the competitive rage that fuels Koepka — or the inexcusable tantrums. It depends whom you ask.