Charles Schwab grades: From Bryson and Spieth to lip-outs, yachts and more 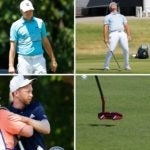 It was a big week back for the PGA Tour.

Golf is back! I mean, golf was sort of back before, when the first group of golfing fellas teed it up at that skins game in Florida. And then it was a little bit more back when two quarterbacks joined in the fun at the next game, also in Florida. But this week it was back back. Early-week anticipation. Thursday storylines. Old names and new names. Twists and turns on a jam-packed Sunday leaderboard. The new normal, to be sure. But something worth celebrating. Here’s the official report card for the Charles Schwab Challenge.

A week before the Charles Schwab Challenge, Harold Varner III released a particularly thoughtful letter about his personal experience being black in the golf world. He certainly didn’t need to play well to validate his words, but he played well anyway, roaring out to a 63-66 start to take the 36-hole lead. Sports felt small against the backdrop of far greater American societal issues, but on a basic level it was really fun to see Varner out in front, loving every minute. While he faded to T19 with weekend rounds of 70-72, this felt, in many ways, like his week.

Unless this should also be A+? I’m still getting used to this grades thing, but wow. First there was Xander’s special bit of misery on No. 17 in regulation — that was bad enough.

Then came the playoff, when Collin Morikawa hit a delightful pitch shot up to about three feet on that same 17th green — and then this happened.

Throughout golf’s history, “experts” have cautioned great players against chasing distance, but DeChambeau deserves credit for once again looking and thinking outside the box to get a leg up on the competition. In his post-round interview, he mentioned that he’s gone from flying the ball 295-300 yards a year ago to 325-300 (“easily”) now. That’s ridiculous, and his Sunday charge left him one inch away from joining the playoff.

There’s not quite as much to Gary Woodland these days — and he likes it that way. The defending U.S. Open champ said he couldn’t go on vacation so he picked up another hobby instead: working out.

“I stayed home, I trained hard, changed the diet a little bit, and I lost a lot of weight,” Woodland said. He’s down 25 pounds. “I wanted to get my body in a position where I could play a lot more and play a lot better.”

Oh, and he finished solo 9th at 12 under. A shot ahead of him was a slimmed-down Patrick Reed, who has been working on his fitness in preparation for a busy run of golf. I guess the verdict on radical weight shifts is still out, but DeChambeau’s T3 gives him the edge for now.

First, let me play devil’s advocate: With no other live sports, the Tour was on the world stage and “Daniel Berger wins on a missed three-footer” is hardly the high-wattage ending that TV execs would have dreamt of.

With that said, this was an excellent week for the PGA Tour. Its superstars were in contention, the Sunday leaderboard fluctuations were absolutely top-notch and the win clearly meant a ton to Berger. In many ways, the most rewarding winners to watch are those to whom the victory means the most and that was certainly the case here.

Most importantly, every player and caddie on site tested negative for the coronavirus. Granted, there’s no way to know for sure how safe the tournament’s execution was — that’s impossible to assign a grade to, and we’ll only start to get a sense as the weeks go on. But from a distance, the PGA Tour’s return was, in all, a big winner.

Top-ranked Rory McIlroy put up one of Sunday’s worst rounds and plummeted from the thick of contention to T32, and that was after birdies on two of the final three holes. His holeout from the greenside bunker at No. 16 was one of the most joyless birdies I’ve ever witnessed.

World No. 2 Jon Rahm missed the cut. And World No. 3 Brooks Koepka played his final nine holes in four under but didn’t do much besides that en route to another middling result at a typical Tour stop. He said at the start of the week that his eye was on McIlroy’s No. 1 spot — neither player planned to finish the week tied in 32nd.

If you can keep emotional investment out of it, watching Spieth is terrific excitement. Just as he had officially exited contention on Sunday, he birdied 10, 12 and 13 to get within two shots of the lead — and then promptly blocked his tee shot O.B. on 14, went on to make a 35-footer for bogey and ultimately finished T10, four shots out of the playoff.

The golf world feels unified in rooting for Jordan Spieth to recapture some of the magic of years gone by. Maybe that’s just another reason why it’s so difficult to do so.

It turns out that you cannot, in fact, predict Tiger Woods’ schedule with 100% accuracy based on the location of Privacy, his yacht. That doesn’t mean y’all should stop — by all means, have at it! — but it was a bit of a letdown thinking we were going to see Woods at Hilton Head before 5 p.m. came and went on Friday and we were left holding our boat-tracking apps in our hands.

I appreciate the idea. I appreciate the efforts of the entire broadcast team, really, to make this all happen, and seamlessly at that. But when it comes to this idea, I think there’s still plenty of upside but the execution needs some work. Maybe we’ll try again next week.

Shooting under par: A+

Daniel Berger seems to have adopted a revolutionary strategy where he just shoots even par or better every single round. According to stat whiz Justin Ray, this was Berger’s 28th consecutive round of par or better, which is just as preposterous as it sounds. Good on him for getting back in the winner’s circle.

Let’s revisit this, because it feels important: It’s going to be incredibly fun, fascinating and entertaining to watch golf’s most famous bodybuilder take on the rest of the Tour. This week, he led the field in driving distance and it wasn’t even close. He led the field in Strokes Gained: Off the tee, too. DeChambeau has turned his equipment, his golf swing and now his body into a living, breathing science experiment. Good news: We all get to watch it play out.

It would be easy to give this a failing grade because according to Jim Nantz, every player in the field was offered the opportunity to be mic’d up and only one — Rickie Fowler — agreed. (Adam Hadwin said that he’d agreed too, though it’s still not clear what happened there.) Fowler missed the cut.

Still, we did hear enough in-game conversations between players and caddies this week to get excited about. D.J. Piehowski made this point well when he said: ‘I think “Mic the players” just needs a re-brand into “Many, many more player-caddie convos.’ He’s right, and we got a taste of that.

We’re one week into the new normal, so let’s put on our optimist’s caps: I think the networks understand what fans are calling for; here’s hoping they’re getting closer to delivering.

Golf on Sunday afternoons: A+

Compelling characters. Tense moments. Tight finish. It felt good to be back, huh?