British Open 2019: With the weight of Ireland on his shoulders, Shane Lowry just 18 holes away from his first major title

PORTRUSH, Northern Ireland — What Shane Lowry of Ireland did on Saturday night here, coming home in 30 shots for a third-round eight-under 63, was astounding, if you want to limit this whole thing to, as the locals say, “the golf.” (As in, “Have you come to watch the golf?”) You can do that, of course, see this only through the green lens of ye olde game. After all, the starter’s line here is what Shane Lowry is doing in this 148th British Open, held this year at Royal Portrush, here for the first time since 1951. The gent has a four-shot lead over Tommy Fleetwood, the Englishman who you’d cast in the lead role of non-equity mounting of Jesus Christ, Superstar.

The first joy of Sunday will be watching Lowry try to do something that is so intensely personal. He’ll be trying to win golf’s oldest and most global title, the championship that the 32-year-old golfer, bearded and bellied, grew up on. Given the quality of his play over the first three days — on Thursday and Friday he shot matching 67s — these final 18 holes will be more of a test of his mental strength than his physical skill. The latter is obvious. Maybe you saw his tee shot on the par-3 16th, a knock-it-down, run-it-out classic that stopped about 10 feet from the hole. Linksy! His birdie there was his seventh of the day; he didn’t have a bogey on the card. Portrush is, as Tiger Woods said, a man’s course, even in Saturday’s calm.

Sunday will be interesting, four-shot lead be damned. Brooks Koepka, for you Koepaniacs, is in a tie for 4th, seven shots back, and not totally out of it. You remember what happened en route to his win at the PGA Championship, when BK went south for a while and DJ went north and a game broke out. That could happen here (but don’t count on it). Tournament golf is so intriguing, and links golf is the best form of it. Seventy-two holes over four days is a perfect formula, like 90 feet between the bases.

As for Lowry: he’s a true bloke, in the Marc Leishman-Eddie Pepperell tradition. (About the only American golf personality you’d call a bloke would be Joe LaCava. Maybe Tony Finau.) A bloke must run with somebody and it is worth noting that this most likable of world-class golfers will be performing his essentially solitary work with a man named Bo Martin, his Irish caddie and age-adjusted doppelganger, beside him.

And millions of people watching, for the golf and for more. 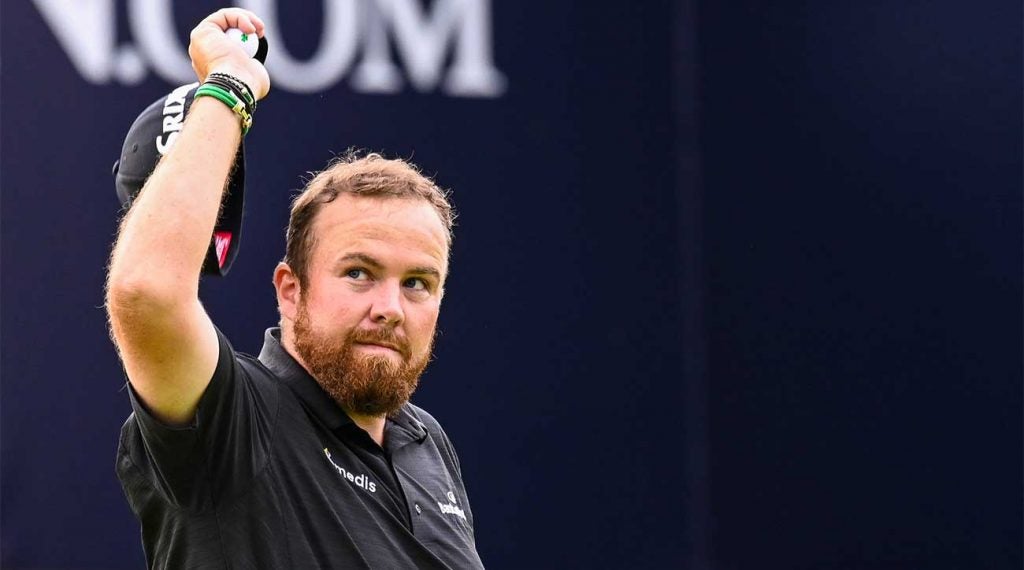 Shane Lowry waves to the crowd after his eight-under 63 on Saturday at Royal Portrush.
Getty Images

On the Emerald Isle, on both sides of the north-south border that for decades meant bloodshed and terror, what Shane Lowry does on Sunday will have implications far beyond the sports section, in Dublin or Belfast or Boston or anywhere else. The reason it took 68 years for the Open to come back to Portrush has nothing to do with the course. The course is earth as an artwork and the club has handled the logistics of putting on a modern tournament without a hitch. The real importance has everything to do with The Troubles, the euphemistic name for the war that divided Irish Catholics and Irish Protestants, Irish citizens in the north and Irish citizens in the south. The resounding cheering that greeted Lowry, a son of greater Dublin, received on Saturday for every birdie he made meant several things:

II. To the fans gathered here, a golfer from Ireland is to be celebrated, without reservation, no matter what part of the island nation he comes from.

III. The Troubles belong to yesterday.

Say whatever you wish about Bill Clinton, Irish-American golf-mad 42nd president of the United States, but he is a god here, for the role he and his administration played in brokering a peace accord that created a world in which Shane Lowry came of age. Lowry was a prodigy, who won the Irish Open as an amateur in 2009, playing out of an inland club called Esker Hills. On Saturday night, the club’s tee sheet was wide open for Sunday afternoon. Who would possibly be playing then? Lowry and Tommy Fleetwood go out in the day’s last twosome at 1:47 p.m. local. The weather is supposed to be nasty, and The R&A moved up tee times by nearly two hours from the normal time, on account of the forecast.

News
Inside the Frat House: Why six American stars are roommates at The Open

He’s been here before, in a manner of speaking. At the 2016 U.S. Open at Oakmont, Lowry had a four-shot lead through three rounds. Nobody was affected by the Dustin Johnson intra-round ruling fiasco more than Lowry, playing in the last twosome and one group behind Johnson. In that Open’s second round, Lowry called a one-shot penalty on himself, over a ball that moved fractionally as he prepared to putt. This is how he explained it then: “I addressed the ball and the ball moved back. I had to penalize myself. It’s very frustrating in a tournament like that.” Two days later, the same thing happened as Johnson stood over a putt, except he said he did not cause his ball to move. The USGA later determined that he had in fact caused it to move but for the entire back nine there was immense confusion over how the leaderboard actually stood. Lowry’s game was already shaky that day, but it only got worse. To get it down to everyday language, he got hosed.

When he was finished with his Saturday round here, Lowry said to his caddie, “At least I won’t have to answer any questions about Oakmont.” He was being funny. He knew the Oakmont questions were coming. The back-and-forth was all incredibly relaxed and good-natured.

“I learned a lot that day,” Lowry said. It was Saturday night in a wee Northern Ireland seaside holiday town and he was talking about a Sunday in Pittsburgh from three years ago, when he was 29 and shot 76. “I’m going to learn a lot about myself tomorrow. Tomorrow is a huge day in my career. But I don’t think — how do I explain this? It probably doesn’t mean as much to me as it did then, which is going to make it a little bit easier.

“I think I learned a few things that day about playing in the final round of a major with a lead. That you need to just hang in until the very last minute. You never know what can happen. And I’m going to do the same tomorrow. That was a long time ago. I feel like I’m a different person. I don’t think I’m a much different golfer, but I feel like I’m a different person now. I think that’s what will help me tomorrow.”

Shane Lowry is not the wet-wool golfer of yesteryear. His coach, Neil Manchip, is a sort of psychologist, too, even if he doesn’t have the sheepskin. That was clear, from how Lowry spoke of their relationship. He said, “We put everything out on the table and we talk about everything, scenarios, what could happen. And I think when I’m very open with him about how I’m feeling I think that’s when I can get the best out of myself and I think that’s what he does, he gets the best out of me, I suppose by making me talk about how I’m feeling. I said to him on the putting green [on Saturday], ‘I cannot wait to get this first tee shot out of the way.’ When I’m nervous I like to talk about it. There’s no point bottling it up. Because if I bottle it up I’m going to become too anxious or nervous.”

Lowry described a European Tour event in Spain, some years ago. Manchip was caddying for him.

“This kind of summarizes what kind of relationship we have,” Lowry said. “I had a chance to win the tournament, playing the 17th. We got down and did the number and I said to him, ‘I’m absolutely shi–ing myself.’ And he said — I don’t know what he said. But I like to talk about things.

Talking is at the heart of Irish life. Golf is too. Sunday’s golf will have all of Ireland watching. This is going to be a keeper, no matter what.