Every evening during major championships, the staff at GOLF.com gather to answer the most pressing question. Today’s is quite simple: who wins the 148th Open Championship?

Sean Zak, associate editor (@sean_zak): Let me be the first person to answer correctly: Shane Lowry cards a solid 72 in the wind for the win.

Jon Wall, equipment editor (@jonathanrwall): Shane Lowry. If the weather changes, I could see someone making a charge. But it’s supposed to rain and blow tomorrow. Vanilla round gets it done for the Irishman.

Dylan Dethier, associate editor (@dylan_dethier): Wow, I SO don’t think this thing is over. Portrush is unkind to the big miss, which means coming back to the field is a definite possibility, especially in the elements. I’m certainly not rooting against Lowry, who has been a joy to watch. But this could be a race to 14 under, in which case I like Fleetwood’s chances. Gimmie Sunday Tommy chasing down Lowry and holding off Rickie, J.B. and yes, Brooks Koepka.

Luke Kerr-Dineen, instruction editor (@lukekerrdineen): Tommy’s winning this thing. Nothing harder than playing with pressure when the tumultuous weather rolls through, as it will. Someone from slightly further back — I’m thinking Brooks, Rose, Rahm or Stenson — will make a run but ultimately come up short. Fleetwood’s in the sweet spot; just far enough behind not to feel the burden of expectation, but just far ahead of the other guys to give him a little cushion. 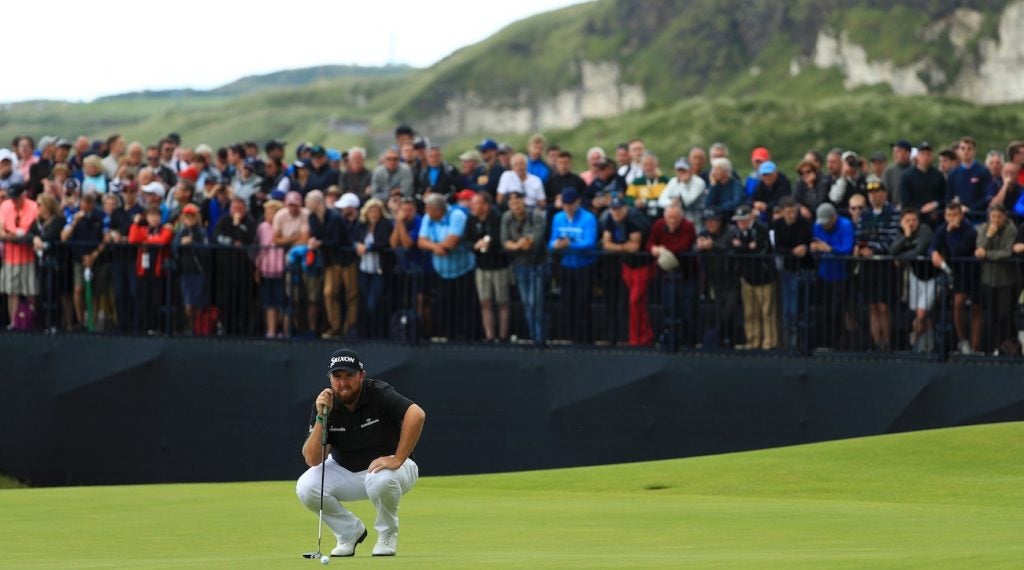 Shane Lowry has plenty of support behind him.
Mike Ehrmann/Getty Images

Jess Marksbury, multimedia editor (@jess_marksbury): I’m all in on Lowry. This feels like destiny, and pure Irish redemption for McIlroy’s miss. There’s no way Lowry lets this one slip away.

Alan Shipnuck, senior writer (@alanshipnuck): I agree with Dylan. Lowry has a loose swing and a couple foul balls could easily lead to a 76. Fleetwood is so pure he’s poised to pounce but I’ll take Brooks to finally have a good putting round, shoot a 69 and beat Lowry in a playoff. Don’t forget, “luck of the Irish” is supposed to be said sardonically.

Josh Sens, writer (@joshsens): Lowry has the kind of lead that’s fun to build on Saturday but uncomfortable to sleep on Saturday night. I’m rooting for him but if the weather forecast holds, I’ll take fleetwood to catch him.

Alan Bastable, executive editor (@alan_bastable): Winter is coming. Or at least wind, rain and madness is. Not hard to imagine someone coming from six or seven back. If I’m Lowry, the two guys at nine under, Rose and Koepka, would most concern me. But I’m not Lowry and he has the will of both Irelands behind him. He gets it done. Shane by a shot.