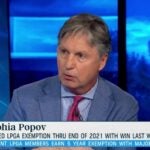 Brandel Chamblee weighed in on the question of exemptions throughout golf.

Brandel Chamblee isn’t likely to ascend to the role of PGA (or LPGA) Tour Commissioner in the coming weeks, months or years — but if he somehow ended up in that chair, he’d be ready with his first course of action.

On Friday night, the Golf Channel personality added to the fascinating conversation that has sprung up following Sophia Popov’s thrilling dark horse victory at the Women’s Open last week. Popov had missed qualifying for LPGA Tour status this season by a single shot, and as a result her major championship victory earned her a two-year exemption on Tour — not the five-year stint she’d have earned if she was a member.

After a GOLF.com story on the subject raised the ire of pros across the sport, Whan responded with a video statement from the Walmart NW Arkansas Championship explaining that, while rules are rules, he’d revisit the issue in the offseason.

To Chamblee, though, the incident spoke to a larger issue in the world of golf: the fact that lengthy exemptions are such a big part of the sport to begin with. On Golf Central on Friday, he made it clear in a conversation with host Rich Lerner he’d like to see the PGA Tour’s current system overhauled to reward players currently on strong form.

“For nostalgic elements and for ceremonial elements, at major championships, I get it,” Chamblee said of exemptions. Some such free passes are famous throughout the sport, like the lifetime exemption for previous winners of the Masters and PGA Championships, the exemption for Open Championship winners until the age of 60 and the 10-year exemption afforded to U.S. Open champions. Chamblee seems fonder of those than the rules governing more usual Tour play.

“But one of the worst rules in golf that the PGA Tour has — well, they have two of them. The Top 50 and Top 25 all-time money list exemption. If I were commissioner for a day, the very first thing I would do is get rid of those exemptions.”

The exemptions Chamblee is referring to allow players who have had long, storied PGA Tour careers a little extra leeway if they’ve had an off-year. They also often explain why you’ll see top pros of yesteryear playing events without other obvious PGA Tour status.

For instance, K.J. Choi, who is 29th in career earnings (with $32.7 million) was continuing to play events on a Major Medical Exemption until earlier this season, at the CJ Cup, when that exemption ran out. Because he hadn’t earned enough FedEx Cup points to get PGA Tour status, he used a career earnings exemption — due to his Top 50 all-time status — to play out the remainder of the season. (You can read more about players on current exemptions here.)

Chamblee doesn’t think much of that rule, favoring a field comprised of those players who have proven their merit more recently.

“Again, the sport is meant to be about what you can do right now,” he said. “Who can play the best. And if you can’t make [the Tour], you shouldn’t be on it.”

“If you win the Cy Young Award one year, are you guaranteed five years on the starting mound? Of course not! If your play falls off or your throwing ability falls off precipitously, you’re on the bench! Or you’re in the minor leagues!”

The exemptions are rarely questioned because they’re often used by popular players looking to extend their careers. Luke Donald, No. 25 on the career earnings list ($36.4 million) missed the cut at the Waste Management Phoenix Open, the final start of his Major Medical Exemption. He’s been playing on a career earnings exemption since then.

As for the golfer who stirred this reaction from Chamblee — Sophia Popov? He sees a bright future, exemptions or no.

“I was smart enough to reach out to those who cover the LPGA, Randall Mell, Steve Eubanks, and they’re very familiar with her game and her talent,” Chamblee told Lerner.

“Of course you alluded to her accomplishments in college golf, but even talking to Jimmy Walker about his dealings with Lyme disease [which Popov had] and how bad it’s been for his game, to see her overcome that ailment and then to reach that sort of potential that was predicted of her in college, it’s a great storyline.

“If she’s half as good as we saw at the Open Championship, she will be exempt well into the next five years.”

In other words, if Popov is on the LPGA Tour in five years, she’ll more than deserve to be there, according to Chamblee.

PGA Championship playoff format: Here's how the winner at Southern Hills will be determined