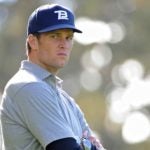 Tom Brady should be getting a lot more strokes than he is at Medalist.

One sport’s superstars challenging themselves in another sport is always a fascinating experiment: In 1936, Jesse Owens raced a horse in Twin Falls, Idaho (the track star prevailed). In 1994, Michael Jordan played a season with the Birmingham Barons, batting .202 with three home runs. And now, this weekend, we’ll witness football greats Tom Brady and Peyton Manning test their golf skills against Tiger Woods and Phil Mickelson in The Match: Champions for Charity, at Medalist Golf Club.

Brady is playing with Mickelson, and Manning with Woods. The format for the front nine will be four-ball, with Brady and Manning each getting three strokes: one blow each on the hardest par 3, par 4 and par 5 — holes 3, 6 and 8. (On the back nine, the squads will play alternate shot.)

If only three strokes sounds stingy, especially on a course as difficult as Medalist, that’s because it is stingy.

With some help from a couple of whizzes in the USGA’s handicapping department, Steve Edmondson and Lee Rainwater, we crunched the numbers to determine the four players’ course handicaps for Medalist (a course handicap is slightly different from a handicap index in that it indicates how many strokes a player should receive at a specific course).

In running the numbers for Medalist, we used Brady, Manning and Mickelson’s official handicaps, all available in the GHIN system. For Woods, we calculated his numbers by using the eight best scores from his last 20 tournament rounds, in keeping with the new World Handicap System formula. The official yardage for the event has not been announced, so for the purposes of this exercise, we employed Medalist’s green tees, which play 6,709 yards.

Here’s what we learned (the “target score,” by the way, is what they’d shoot if they played to their course handicaps):

As you can see, three strokes for the quarterbacks is decidedly unequitable! If they were to play off Tiger’s handicap (the best player in the group), Brady should be awarded 19 strokes, or 9.5 strokes for nine holes, while Manning is due 17 strokes, or 8.5 on the front side. Even Phil should be getting one a side off his old rival.

So, for the first half of the match, don’t be surprised if Brady and Manning don’t contribute much to the bottom line. As the old golf saw goes, Tiger and Phil’s shoulders are likely to be aching from carrying the load.

Tour Confidential: Did Winged Foot play too easy? What do you expect to see in Round 2?

Jordan Spieth knows he's lost, but he doesn't know what to do about it