The Wizard of Winged Foot: Why Billy Harmon is a useful resource at the U.S. Open 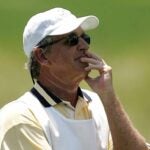 MAMARONECK, N.Y. — Billy Harmon was on the 10th tee Wednesday afternoon, the long par-3 where half the players will start their rounds on Thursday, the other half on Friday. Billy was working, in a manner of speaking. He was the starter, breaking up fights among the players waiting to go off, that sort of thing. He grew up at Winged Foot, where his father was the longtime pro.

Young Brandon Wu walked on to the tee.

Billy caddied for years for Jay Haas. He knows what everybody knows: You don’t want to be hitting a 210-yard 3-iron into an impossible green surrounded by choking rough and have-a-nice-day bunkers at 6:50 on the morn.

“Off one,” Brandon said.

Young Brandon smiled. Billy is 70. Brandon is 22. What they share is golf and that’s a lot.

Golf didn’t get its annual family reunion moment this year, the practice rounds at the Masters, where the different generations intersect, catch up, connect, prove all over again that the game is everchanging (the equipment) and unchanging (fewest shots wins). Billy was in a role that comes naturally to him, handing down golf. You’d say this of Billy and not many others: He’s a life member in the family of golf.

“Did you like golf right off, as a kid?” Billy asked.

“First baseball and swimming, the stuff my friends were doing,” Brandon said. “By middle school, though, it was golf.”

Billy nodded. The kids commit early to a single sport these days.

On Sunday last year at Pebble Beach, Brandon was trying to be the low amateur. He woke up that morning in a guest room of a big house on the Cypress Point Club course that had been occupied by Billy’s older brother, Butch. Butch moved out and Brandon moved in. Later that day, Brandon graduated from Stanford, an informal ceremony just off the 18th green.

The year before, at the U.S. Open at Shinnecock Hills, he caddied for a friend. The year before that, 2017 at Erin Hills, he was the first alternate. Now he’s a pro, taking it all in.

Rickie Fowler came up to the 10th tee, hit a long iron that was so on the face you wanted to cry. A former Butch Harmon disciple. Not with Butch now, though. Brandon watched him closely.

“Everybody out here hits it solidly, but some are at a higher level,” Brandon said. Enter Rickie.

“Did he hit a good one?” Billy asked.

There was actually no word for it, it was so pure. A meaningless practice shot in a meaningful practice round. What made it special was that there might be 100 people in the world who could hit the sawed-off long iron he hit. The Harmon fingerprints were on the shot.

Earlier, Andy North had been on the tee, shooting the breeze with Billy. They go back forever. Before that Brandon had a chance to talk to Andy, a two-time U.S. Open winner. Andy gave him some excellent advice: “Make your 10-footers.”

“You’re gonna have a lot of 10-footers here,” Billy said.

Miss the green. Pitch it well. Watch it roll out. Try to make the putt for par. U.S. Open golf. Andy won this thing twice. Brandon is about to play his first as a pro. He’s all ears and eyes and youth and talent. Billy has seen a million golfers come and go. Some have staying power. Maybe young Brandon will be one of them. He’s off the good start.

Billy was on the bag for one of those four events, the ’84 Open.

Billy doesn’t live in the past. That’s why he’s such a boyish 70-year-old. The game has kept him young.

“Have you played some with Collin?” Billy asked Brandon.

Collin Morikawa. When Morikawa was at Cal, Wu was at Stanford.

Knowing that, Billy rattled off three or four other names, golfers that Brandon would likely know. He knew them all.

Dustin Johnson came to the 10th tee and said hi to Billy. Brandon headed home. Literally, home — his parents’ house in Scarsdale. Billy’s nephew came to the tee, Claude Harmon III, Dustin’s teacher. They gave each other all sorts of grief. You know how it can be, at family reunions. Billy’s job was to keep the peace and hand down the game.

Brandon hopes not. Billy will be a spotter in the rough on the 4th hole. It’s nasty in there. But if Billy finds some errant shots, and he likely will, the guys will greet him like a long-lost brother. Actually, they’d greet him that way anyway.

Anatomy of a Ryder Cup blowout: How the U.S. found its mojo and throttled the Europeans

Tour Confidential: How did the U.S. finally capitalize on its potential?

America dominated this long overdue Ryder Cup, and Europe reminded us why we love it