Tour Confidential: The biggest surprise from Day 1 at the Open Championship was… 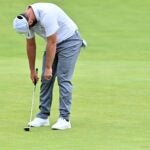 Jon Rahm during the first round of the Open Championship.

Day 1 of the Open Championship at Royal St. George’s is in the books. Louis Oosthuizen is atop the leaderboard, a familiar place. Jordan Spieth and Brian Harman are a stroke back. Seventeen players are three shots back or better, and 73 players shot par or better. Among those who failed to break par were the past two U.S. Open champs — Bryson DeChambeau and Jon Rahm — along with Justin Thomas, Patrick Reed and Patrick Cantlay. All that in mind, what, to you, stood out as the biggest surprise of the first round?

Jessica Marksbury, multimedia editor (@jess_marksbury): It’s Jordan for me. Even though he’s been resurgent for months now — and even at major championships! — I was still a bit skeptical about all the hype surrounding his potential performance this week. But that opening 65 made a big-time statement.

Dylan Dethier, senior writer (@dylan_dethier): I’m surprised to see Louis Oosthuizen playing this well again. We should never, ever be surprised to see King Louis show up for a major championship — but he can’t do it every time, can he? Apparently he can. I’m amazed at the way he keeps showing up with his very best stuff at the very biggest moments.

Josh Sens, senior writer (@joshsens): Jon Rahm has been on the kind of torrid run that’s hard to maintain. But given his early tee time, in the calmer winds, I expected a lower score than his one over. And then there’s Phil. Ten-over for the day and tied for dead last? Don’t tell me you predicted that.

Sean Zak, senior editor (@sean_zak): I was surprised to see Rory McIlroy hit the first fairway! His round was nice to see, even if he gave that first birdie back and didn’t putt that well. I think he could really get going on these slower greens. With fair weather, he could totally shoot 65 tomorrow morning. I’d bet he plays well Friday.

Alan Bastable, executive editor (@alan_bastable): ​​Umm…Bryson’s remarks, anyone?! You never know what’s going to come out of BDC’s mouth, but his takedown of his driver was a stunner. You just don’t hear players tweak their gear that bluntly. And then for a Cobra rep to fire back? Unprecedented stuff. And how about five Englishmen in the top 10?! It’s coming home!

Tim Reilly, director, commerce and social media (@lifeoftimreilly): How at peace Spieth looks playing in The Open. For a guy who often appears to be in his own head, there was a sense of freedom watching him Thursday. He wasn’t overthinking. He wasn’t chewing Greller’s ear off. He was simply playing creative golf. There’s no one who resembles an artist more than Spieth on the course. Spieth has the potential to put together another masterpiece this weekend.

'This is the player I can be': Cameron Champ finds his balance, wins 3M Open