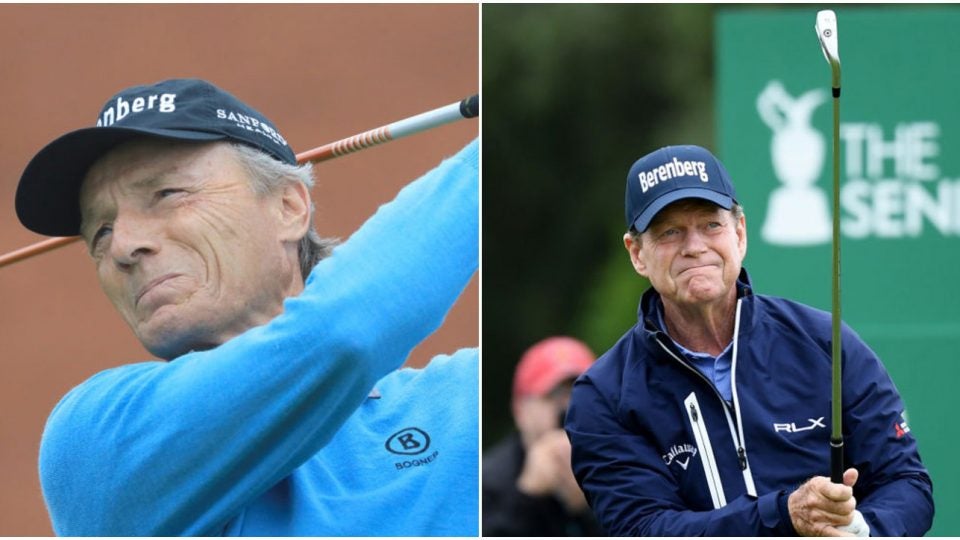 Bernhard Langer and Tom Watson were the talk of the town after the Senior British Open.
Getty Images

The final round of the 2019 Senior British Open belonged to two men: Bernhard Langer and Tom Watson.

Langer won a record fourth Senior British Open on Sunday at Royal Lytham and St Annes Golf Club in Lancashire, England, by finishing six under for the tournament, beating out Paul Broadhurst by two strokes.

The 61-year-old Langer came out on fire, carding four birdies on the front nine to make the turn at four under for the day and six under for the tournament. Langer entered Sunday three shots back of Broadhurst, who went on to shoot one over on his round to drop to four under overall.

The two-time Masters champion got as low as eight under after back-to-back birdies at the 13th and 14th holes, but a pair of bogeys at the 15th and 17th brought Langer back to even par on the back nine.

Watson shot a three-over 73 on Sunday to finish the tournament tied for 64th at nine over par. While it wasn’t a successful weekend for the three-time Senior British Open winner, Watson put a bow on his senior golf career as he announced on Saturday that he would no longer play in both the Senior British Open and Senior U.S. Open.

Watson never won a Senior U.S. Open in his career, but he did win the 1982 U.S. Open at Pebble Beach. He also won two Masters in 1977 and 1981, and most notably, five British Open titles in his Hall of Fame career.

Watch the legend himself sink his final putt and say goodbye.