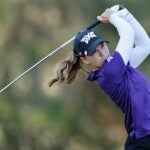 Austin Ernst has now won three times on the LPGA.

Austin Ernst led by just one stroke after 54 holes, but there was little drama on Sunday evening. Ernst closed with a two-under 70 at the Golden Ocala Golf & Equestrian Club in Ocala, Fla., to win the LPGA Drive On Championship and cruise to her third LPGA Tour title.

Ernst finished her round with five straight pars to finish 15 under overall and beat runner-up Jennifer Kupcho by five. Kupcho, who shot 74 on Sunday, entered the day one off the lead but couldn’t catch Ernst on Sunday.

“I don’t know what golf course Austin is playing to be honest with you,” joked Danielle Kang, who tied for 6th.

Ernst, 29, grabbed her first LPGA victory at the 2014 Cambia Portland Classic. Her second came at the Walmart NW Arkansas Championship in August of last year, and she didn’t wait near as long for her next win.

“I just fully committed to believing in what I do and that it’s good enough,” she said. “I think this week proved that it’s more than good enough. It was fun to walk up [on 18] and know that I was going to win. I haven’t had that yet, so that was fun.”

Jenny Coleman was alone in third, and Charley Hull, Jessica Korda and Lydia Ko were among a group of six tied for eighth.