American Express tournament: 3 things to know after Round 1 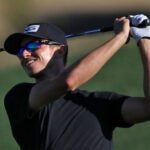 Brandon Hagy hits a shot on Thursday on the 18th hole on the Nicklaus Tournament Course.

The leader replaced the world No. 2. You couldn’t tell the difference. Golf’s version of next man up. Here are three things you need to know after Thursday’s first round of the American Express, played on two courses at PGA West in La Quinta, Calif.

Hagy, in the tournament after the world No. 2 withdrew on Monday, birdied six of his next eight holes on the front nine of Nicklaus Tournament Course, then birdied four of his last six holes for an eight-under 64 and a one-shot lead over Byeong Hun An. Max Homa, Si Woo Kim and Martin Laird are two strokes back.

“I think I’ve been working on some good stuff the last couple weeks and I hit a lot of iron shots close and I made kind of those 10- to 15-foot mid-range putts the whole day, which you’re going to have to make a few of those to put 10 birdies on the card,” Hagy said.

59 players are within five shots of the lead

Phil Mickelson is 10 strokes behind