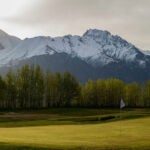 The USGA has held championships in 49 states (plus the District of Columbia). They’re about to bring that number up to 50.

Anchorage Golf Course in Anchorage, Alaska will play host to the 60th U.S. Senior Women’s Amateur come 2022, the organization announced on Wednesday. The event, held July 30-Aug. 4, is particularly special because of what it represents, USGA CEO Mike Davis said in a release.

“It’s a monumental occasion for us to bring a championship to Alaska, something that has been a long time coming,” Davis said. “Players from all over the country dream of becoming USGA champions, so it is important we bring our events to all corners of the United States to expose golfers and golf fans to the inspiration and competitiveness of our championships. We’re so thankful to Anchorage Golf Course for working with us to make this dream a reality.”

I spent over a week exploring Alaska’s golf courses last summer and recognize that there are a few challenges associated with holding a championship in America’s 49th state. The season starts late and ends early. Conditions are unpredictable for much of the fall and spring. It’s far away. Oh, and despite its tremendous size, Alaska has just a half-dozen 18-hole facilities.

But Alaska boasts certain advantages, too. In the summer, the sun never sets, which can give courses some 20 hours of growing time per day, allowing them a chance to green up fast and turn lush — with the right attention. That same midnight sun allows golfers to play at all hours of the day and night, too, which means that when golf is on, it’s really on. Oh, and there isn’t a single private course in the entire state, which means the USGA can lean into its more democratic side in bringing a championship to the frontier.

While the USGA has never brought a championship to Alaska, it has played host to U.S. Open Local Qualifying every year since 2009. It’s typically the smallest qualifying site in the world and the coldest, too, with about a dozen competitors teeing it up at a rotation of Anchorage-area courses in search of glory. (That’s what brought me to Alaska last summer.) Whatever the state lacks in sheer golf numbers it makes up for in passion and heartiness, so it’s a joy to see that rewarded by golf’s largest governing body.

Hopefully they’ll be back soon with another.

Once you’re in Alaska, Anchorage Golf Club is actually very convenient to get to; it’s just 15 minutes from the airport. The 6,600-yard layout boasts dramatic views of the surrounding mountainscapes and rolls through woods and hills, demanding precision on some holes and aggression on others. The course has adopted a particular focus on its conditioning with the Senior Women’s Am in mind, and general manager Rich Sayers said the course was “thrilled and honored” to be playing host to the championship.

According to the USGA, the U.S. Senior Women’s Amateur Championship is open to any female golfer 50 years of age or older whose Handicap Index does not exceed 14.4. The field will consist of 132 players who will earn entry into the championship via sectional qualifying at sites nationwide or through an exemption category.

The format for the championship includes two rounds of stroke play followed by six rounds of match play, with the low 64 scorers in stroke play qualifying for match play. The 2019 U.S. Senior Women’s Amateur was a matchup of the same two finalists as 2018, and it was won by Lara Tennant of Portland, Ore., who defeated Sue Wooster, 3 and 2, for the second time. While the 2020 championship was canceled due to the COVID-19 pandemic, the 2021 championship is set for Sept. 10-15 at The Lakewood Club in Point Clear, Ala.

You can see the number of USGA championships by state below:

USGA Championships by State (through Sept. 2020)