The advice Tony Romo gave Will Zalatoris before his Masters breakthrough 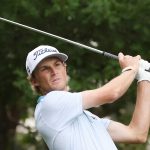 Will Zalatoris hits his tee shot on Saturday on the 4th hole at Augusta National Golf Club.

Will Zalatoris, upstart 24-year-old golfer and sudden Masters contender, and Tony Romo, longtime Dallas Cowboys quarterback turned television analyst, are friends. They played together during Zalatoris’ first pro event, the 2018 Pebble Beach Pro-Am, they’re both members at the Maridoe Golf Club just outside of Dallas, and Zalatoris has said that, during pro golf’s shutdown last year, he and Romo would play sometimes five times a week. Or they’re maybe more than friends, Zalatoris said. “He’s basically been a big brother to me.”

So as little brother began one of the biggest weeks of his young life this week, big brother gave some big brother advice.

And put your phone away.

“I told him to be prepared for his life to change over the course of four days,” announcer Jim Nantz said toward the end of CBS’ broadcast of Saturday’s third round of the Masters, relaying the words of Romo, his NFL broadcast partner. “He said I want to tell you this so you can be prepared for it. Don’t be surprised, but embrace it and know it’s the normal progression.

“I said turn off your phone on Friday night, and you can apologize to the people you didn’t respond to later and you can go back and do that but just watch movies and play golf next weekend.”

Zalatoris opened his Masters with a two-under 70, followed it up with a Friday 68 and started Saturday’s third round in his first final pairing in a major, where he shot a respectable 71. On Sunday, Zalatoris, still without full-time PGA Tour status, though one of the hottest players in golf, will tee off in the second-to-last pairing, four shots behind leader Hideki Matsuyama.

Big brother will no doubt be watching.

At some point over those Maridoe rounds, Zalatoris said this week, Romo’s become “a great sounding board.” After 14 years in the NFL and four in the CBS booth, you see and hear a lot. Enough to offer a little brother a little advice.

“The history, you would think, would probably throw some more pressure on me, but if anything, it’s just appreciating the fact that I’m here and I get to hopefully be a part of that history,” Zalatoris said.