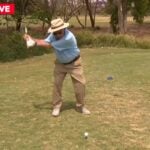 A recent hole-in-one by 99-year-old Hugh Brown was not the first ace of his life, but it will be the most memorable one.

Hugh Brown’s recent hole-in-one was not the first ace of his life, but it will certainly be the most memorable one.

Brown first scribbled 1 into his scorecard at the age of 61, an impressive feat no doubt. But that was way back in the early-1980s. He’s now one year shy of his 100th birthday.

In a story so wild it’s hard to believe, the 99-year-old golfer drained his tee shot on the 145-meter par-3 5th hole at Indooroopilly Golf Club in Queensland, Australia… while the group ahead of him was still on the green.

According to a video report from 9News Queensland, the near-centenarian didn’t think he could reach the putting surface on the short par-3, even with his typical choice of driver. But as the group on the green at the time can attest, he was wrong.

You can watch the full report, featuring interviews with Brown and a reenactment by the players ahead of him who witnessed the feat up close, below.