6 reasons why Bryson DeChambeau vs. Brooks Koepka will top your expectations 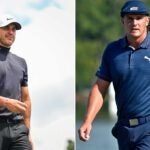 Vegas, baby! Are you ready to rumble? Okay, maybe not.

You don’t have to be a cynic to feel less than inspired by this week’s iteration of The Match, an outgrowth of a “feud” between Brooks Koepka and Bryson DeChambeau that has often seemed as canned as the cranberry sauce you’re about to eat.

We get your grumpiness about the whole affair. But since Thanksgiving is all about, you know, giving thanks, we’d like to offer a sunnier perspective. In the spirit of gratitude, here are six reasons The Match will be better than you think.

There really is some bad blood

No one is suggesting that this is Ali-Frazier, with the prospect of first-tee fisticuffs. But these guys are also a long way from a bromance. There’s some genuine tension in their past that is bound to bubble up in the competition. The Thrilla in Manilla? Not exactly. But with each man’s chest-puffy pride on the line, someone is destined for a wounded ego. For that reason alone, we’re not ready to dismiss it as The Blip on the Strip.

The bells and whistles of the broadcast

The entertainment value of these kind of matches depends largely on the quality of the banter. Can Brooks and Bryson deliver? That’s TBD. But you can count on getting good stuff out of color commentators Charles Barkley and Phil Mickelson, to say nothing of the whiz-bang features of the broadcast, which will include Toptracer tracking of every airborne shot.

Long drives. Chip-offs. Closest to the pin. Past iterations of The Match have featured all kinds of sizable side action. Given the location, bank on anything and everything being on the table. Bench-press competition, anyone?

Love him or not, you can’t deny that there’s nothing quite like watching Bryson rear back and blast it. That spectacle will be on repeat all day. And here’s betting that Brooks won’t be far behind.

Ever since the early days of the Skins Game, exhibition golf over Thanksgiving weekend has featured big names in balmy backdrops. The shot-making can be fun. But depending on where you live, the real appeal is staring at the palm trees on your screen instead of at the sleet outside your window. While Friday’s forecast for Las Vegas doesn’t call for sun-bathing weather (highs in the mid-60s), things will look downright tropical for those tuning in from, say, Minnesota, where it’s almost time to break out the ice-fishing gear.

In their boundless wisdom, the organizers of this Match have shortened it to a 12-hole competition. So, think of it as a televised version of a Thanksgiving visit from your in-laws: even if you don’t thoroughly enjoy it, you won’t have to put up with it for long.