Are 500-yard drives coming to the pro game? This golf legend thinks so 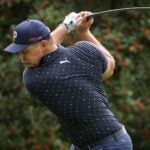 Sports are predicated on pushing boundaries. From the sub four-minute mile to the forward pass in football, athletes are always looking for that extra edge that will allow them to reach never-before-seen heights. In golf, that high-water mark was seemingly set by Tiger Woods in the early 2000s, but now that overpowering brand of golf is being taken to the utmost extreme by Bryson DeChambeau.

Although he has just one major title to his name, DeChambeau’s performance at the U.S. Open already has pundits suggesting that he will change the way golf is played in the future. With jaw-dropping drives and a physique that looks like it belongs in powerlifting more than golf, his violent bomb-and-gouge (emphasis on bomb) has some suggesting that he’s provided the blueprint for how golf will be played for generations to come. This conversation has also inspired a rehashing of the distance debate that dominated the headlines earlier this year. Should there be an equipment rollback to keep modern pros from bastardizing classic courses? Is there such a thing as too much power? Count nine-time major winner Gary Player among those who thinks changes need to be made.

“Obviously the equipment also does help to a large degree, and this is something Jack and I have been advocating for I don’t know how long, (but) they’ve got to cut the ball back,” Player said. “We’re seeing things we never thought of.  And let me tell you, we’re in our infancy.”

Player went on to suggest that DeChambeau won’t be the last player to bulk up to the utmost extreme and play bully ball each week. Technology is so advanced that it’s not outrageous to think golf will look foreign in the future if interventions don’t materialize.

“Now I’m going to make a statement,” Player continued. “I don’t know how far the ball can go. It would be very interesting for me to hear what is the limit. I don’t know what the limit may be, but don’t be surprised if you see them hit it 500, because these guys are so big and so strong — it’s frightening. And they’ll be using a long driver of course there’s a limit on what you I suppose, what you can use. Is there a limit?”

Suggesting players will be capable of hitting 500-yard drives may sound outlandish, but the first person to suggest a sub four-minute mile likely sounded outlandish, too. With the rapid transformation that DeChambeau has made over the past year, it’s fair to wonder how far it can go.

Will we see him next summer with an added 30 pounds and, with it, 30 more yards in the tank? It’s fair to wonder, but one thing is certain — golf in the post-Bryson era will look different than it has in the past. Whether or not that’s a good thing is up for interpretation.