5 storylines to watch at the men’s Olympic golf competition 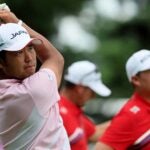 Golf has a place in the Olympics for only the second time since 1904, and the 60 competitors who have the privilege of teeing it up at Japan’s Kasumigaseki Country Club this week will vie for gold for only the fourth time in the sport’s history. Five of the world’s top 15 players will be in attendance, including newly crowned Champion Golfer of the Year Collin Morikawa, Justin Thomas, Patrick Reed and Rory McIlroy. Here are five storylines to watch as the action unfolds beginning on Wednesday, July 28th.

1. A possible exemption from duty

South Korean competitors Sungjae Im and Si Woo Kim, ranked world Nos. 27 and 55, respectively, opted to skip playing the Open Championship in order to prepare for the Tokyo Olympics. Why? South Korea mandates that all men between the ages of 18 and 28 serve a minimum of one year and six months in the military. However, the requirement is waived if you win an Olympic medal. (Two-time PGA Tour winner Sangmoon Bae had to pause his PGA Tour career to fulfill his military-duty requirement in 2015.) So both Im and Kim have plenty to play for.

Japan’s top-ranked player, Hideki Matsuyama, received an incredible honor in his homeland when he was given the Prime Minister’s Award in the wake of his April Masters victory, when he became the first Japanese male to win a major championship. And now, mere months later, he’ll have the chance to tee it up in his home country at a course where he has plenty of good vibes. Back in 2010, Matsuyama won the Asian Amateur at Olympic host venue Kasumigaseki CC.

Prior to his positive Covid-19 test, World No. 1 Jon Rahm was the favorite for a gold medal with 5/1 odds, according to William Hill Sportsbook. Xander Schauffele and Collin Morikawa are next at 10/1, then Rory McIlroy at 11/1.

4. American improvement on the podium

At the 2016 Rio Olympics, Matt Kuchar was the lone American medalist in golf. He came away with a bronze medal, while Henrik Stenson claimed silver and Justin Rose took gold. Can the United States contingent improve upon the result from Rio? On paper, the odds look pretty good. Team USA is the strongest in the field, with four of the top 13 players in the world ranking representing the red, white and blue.

Though Kasumigaseki Country Club is an unfamiliar venue to pretty much everyone outside of Japan, the course is no stranger to hosting major tournaments. In addition to the 2010 Asian Amateur won by Matsuyama, Kasumigaseki has hosted the Japan Open four times, the Japan Amateur twice, the Japan Women’s Amateur three times, a Japan Women’s Open and the Canada Cup (now the World Cup of Golf). Though the course dates back to 1929, it was redesigned by Tom and Logan Fazio in 2016, so it will be sure to provide an appropriate test.

Shop our selection of red, white and blue gear