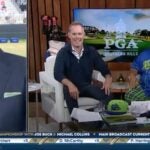 If you woke from a coma around 1 p.m. ET on Thursday afternoon and turned on ESPN’s broadcast of the PGA Championship, let us be the first to extend our deepest sympathies.

What you witnessed on your television screen this afternoon was unlike anything you — or anyone — has ever seen during a golf broadcast. It was odd, it was unique and it was decidedly not buttoned-up. It had the tenor of a Twitch stream, the interview lineup of a late-night talk show, and the comedic sensibility of something in between the two.

If the shock of what you witnessed wasn’t enough to make you completely question your grip on reality, witnessing Joe Buck with an ESPN logo underneath his chest likely did the trick.

What you saw was golf’s first-ever “Manningcast” — a new, laid-back style of sports television founded by ESPN in conjunction with the Manning brothers. The broadcast is built to be a kind of sports talk show, with celebrity interviewees and hosts commenting on the action as it happens. It’s a place to share stories, to share laughs, to share pints, and to share a few minutes watching the game with the folks you’ve always wished you could watch a game with.

Here are five lessons we learned from watching a golf broadcast unlike any other.

5 lessons from the PGA Championship Manningcast

1. Joe Buck and golf are still a good marriage

Joe Buck hasn’t been spotted calling a men’s major since the final round of the 2019 U.S. Open at Pebble Beach, but Thursday proved his golf knowledge makes him a natural fit calling the sport (despite his most sardonic suggestions to the contrary).

Thursday was the long-time FOX Sports broadcaster’s first time in front of the camera since moving to ESPN to call Monday Night Football in January. Of course, ESPN’s golf coverage is limited — on linear television, the PGA and Masters are its only golf properties — but it’ll be interesting to see if ESPN considers leaning on Buck’s golf knowledge heading into the future.

2. ESPN’s biggest names are invested in the format

There’s an inherent awkwardness in having a rival broadcast running parallel to a network’s main feed. Sure, it’s good if the Manningcast does well, but what if it does too well? Could it distract from ESPN’s (routinely stellar) regular coverage?

It says a lot, considering the circumstances, that Scott Van Pelt joined the show for its first segment on Thursday afternoon, welcoming Joe Buck to the ESPN team and ushering in the new broadcast in the process.

“I don’t know if I should be directing people to watch something else besides us, but it’s additive, right?” Van Pelt said on a press conference in the lead-up to the PGA. “It’s just another option of how to watch and enjoy. I’m certain that it’ll be a blast.”

3. The Manningcast meets casual fans where they are

One of the inherent obstacles facing golf in reaching casual fans is that outside of Sunday afternoon, not much of it feels consequential. The Manningcast format — while undeniably disjointed and slow in some moments — gives golf TV a way to meet those fans where they are.

The celebrity and athlete conversations provide an easy incentive to tune in (or engage on social media) and be entertained. There’s less analysis on the PGA Championship’s version of the show than on Monday Night Football’s, but perhaps that’s by design. It all lowers the barrier for casual fans to watch the sport, which isn’t a bad thing.

One of the Manningcast’s most charming qualities is its unpretentiousness. Buck called the broadcast from “a bunker,” and talked freely on the air about the possibility of technical difficulties unseating a later interview.

For most of the day, the two men carried the conversation while an audio-free version of the main feed played picture-in-picture next to them.

It was simple, it was easy, the bells and whistles were noticeably absent. Would we want this from my golf broadcasts every week? Definitely not. Were we glad we got it with the Manningcast? Absolutely.

Manningcast works because it understands something fundamental about entertainment: authenticity is e-v-e-r-y-t-h-i-n-g. It’s why Thursday was worth watching, and why we’ll be tuning in again on Friday.

“I think it’s fun,” Van Pelt said. “I happened to see Eli and Peyton last week. I asked Eli, I said, ‘did you enjoy it?’ He said, ‘I really did.’ They realized that all they had to do was be themselves.

I think the biggest mistake that you can make in TV is if you overthink stuff and try too hard. Especially those guys. They had this innate kind of — they’re brothers, who just both happen to have won multiple Super Bowls, not a lot of those around. I think they leaned into that, and that’s what made it so appealing.”