3M Open live coverage: How to watch Round 3 on Saturday 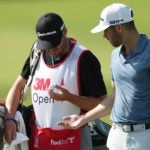 Defending champ Matt Wolff is back in the mix at the 2020 3M Open.

The 2020 3M Open at TPC Twin Cities is already at the halfway point, and now instead of fighting to make the cut, the remaining competitors will do their best to move up the leaderboard and into contention ahead of Sunday’s final round. Here’s everything you need to know to watch the third round.

Red numbers were plentiful in Round 2, as several players fired rounds in the mid-60s. Scott Stallings shot a round of 7-under 64 to launch himself from below the cut line into contention, while Harris English and Talor Gooch were among four total players who shot 65. Buton Saturday, everyone will be chasing tournament leaders Michael Thompson and Ricky Werenski, who lead the field by one shot at 12 under par after signing for rounds of 64-66 and 63-67, respectively. They’ll play together — along with Tony Finau — in the final grouping at 1 p.m. ET on Saturday.

Last year’s champion, Matthew Wolff, is also in the mix this week, and will play alongside Gooch and Xinjun Zhang at 12:49 p.m. ET.

You can find all the information you need to to watch Saturday’s third round of the 2020 3M Open online and on TV below.

How to watch 3M Open Round 3 on TV

How to stream 3M Open Round 3 online

With the help of an active cable TV subscription, watching the third round of the 2020 3M Open online will be easy. Fans can view Featured Group coverage of the second round all day Friday via PGA Tour Live, though you will need an account to access the stream.