3M Open live coverage: How to watch Round 2 on Friday 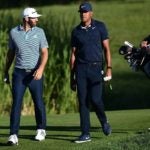 Tony Finau chats with [playing partner Dustin Johnson during the first round of the 2020 3M Open.

One round is complete at the 2020 3M Open at TPC Twin Cities, and now the competitors will fight to make the cut in Round 2 on Friday, July 24. Here’s everything you need to know to watch the second round.

Scoring was unusually high in the morning of the first round at TPC Twin Cities, but a few Tour pros went really low to make up for it. Among those players was Tony Finau. Finau drained seven birdies on his way to an opening-round 65 on Thursday to tie for the early lead. Ryan Moore, Xinjun Zhang and Nick Watney were among the early starters to match Finau at six under. He starts his second round at 1:40 p.m. ET on Friday.

Finau’s first-round playing partner Dustin Johnson will not be teeing it up on Friday at all. Johnson struggled to a first-round 78, which featured a quadruple-bogey 9, before withdrawing due to a back injury.

With DJ out, Brooks Koepka is now the highest-ranked player in the field at the 3M Open. Koepka had a roller-coaster round on Thursday that resulted in a one-under 70. He’ll need to play well in Round 2 to make the cut.

You can find all the information you need to to watch Friday’s second round of the 2020 3M Open online and on TV below.

How to watch 3M Open Round 2 on TV

How to stream 3M Open Round 2 online

With the help of an active cable TV subscription, watching the second round of the 2020 3M Open online will be easy. You can catch the full second round Golf Channel broadcast on golfchannel.com. Fans can also view Featured Group coverage of the second round all day Friday via PGA Tour Live, though you will need an account to access the stream.