How does 34 under happen? It starts with Tiger, says Jon Rahm 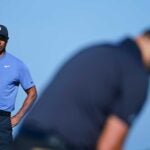 Tiger Woods watches on as Jon Rahm plays a shot during the 2020 Farmers Insurance Open.

It didn’t feel great for Jon Rahm to break the PGA Tour scoring record by two, only to lose the How Low Can You Go Open on Sunday. In fact, as he said, it felt weird.

Thirty-three under is supposed to get it done everywhere. Even on the wide fairways and soft greens on an island in the Pacific Ocean. But Rahm didn’t get it done — he lost by one to Cameron Smith — and he was understandably left with more questions than answers about how it felt.

Was this absurd birdie fest the kind of thing that we might see more of in the future?

Rahm didn’t say yes, and he didn’t say no. What he did say was that Tiger Woods, in all the best ways, is responsible.

“I know who you’re referring to, right?” Rahm replied during his press conference. “You have what’s probably a lot of purists of the game who are probably going, ‘Oh, you got to roll the ball back, shorter drivers, do this, do that.’

“The simple fact is since Tiger started playing golf you’re getting people that take this game a lot more seriously. Everybody thinks about it more like athletes. So the level of the game — of all of us — it’s a lot higher than it used to be.”

He’s not wrong about the Tiger part. Just about every player on Tour these days looked up to Woods before and as they ascended the game’s ranks. Whether or not they were meant to conquer the Tour, they got into it more because of Woods, who just so happened to be setting absurd scoring records of his own during his extended peak atop the sport.

“Not to take away anything from anybody,” Rahm continued. “Tiger’s an amazing player and he was better than all of us have ever been, but overall I think the average player, it’s a better golf player. And when you come to a golf course where the only defense is wind — at least you expect 20 miles an hour here, and we usually shoot 20- to 26-under and win the tournament.”

Perhaps that’s just a nice way to open up the year: a rather defenseless course where players can show off just how good they are. In the end, Rahm’s most memorable response from losing the boat race to a speedy Australian wasn’t that he pinpointed Tiger Woods as the start of a revolution, but rather that he was totally unsurprised by the result. As were a number of Tour stars this weekend. Totally unsurprised at 34 under.

“You get the same golf course with no wind, what do you expect?” Rahm said. “You have 50-yard fairways, soft greens, we’re going to shoot low. It’s just kind of how it goes.”