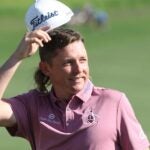 Cameron Smith tips his cap to the crowd after winning the Sentry Tournament of Champions Sunday.

One event down in 2022, and a longstanding record went with it. Cameron Smith won the Sentry Tournament of Champions Sunday at Kapalua and demolished the PGA Tour’s 4-round scoring record of 31-under with a 34-under performance.

Smith’s week of 65-64-64-65 was good enough to beat Ernie Els’ 19-year record by three, but that only tells half the story at this new year’s first event. Smith needed every one of those shots under par because he wasn’t the only player to break the record. Jon Rahm did, too. And so did Matt Jones.

Three players finished at 32 under or better this week, setting the new standard for a single-tournament scoring record. Why? How? These natural questions can be answered in simple ways, and we’ll lean on Justin Thomas to explain. After shooting the course record Saturday Thomas told reporters bluntly:

“Golf fans just need to understand what cause scores,” Thomas said. “I think everybody, they just see, ‘Oh, they’re hitting it so far now, that’s why it’s so low.’

There’s your answer. These guys are good, and they’ve rarely come across a course this ripe for the taking. The first two rounds were played under lift, clean and place stipulations by the Tour. That helps. The wind has been down most of the week in Hawaii and the course had received plenty of rain, leaving it soft and gettable. Three players finishing at 32 under is your result. And with 19 under as the average.

Smith had to work for it, though. He was pushed by the best golfer on the planet all the way to the 18th hole. Rahm was hole high and off the green of the par-5 in to while Smith needed to pitch on. Rahm two-putted for an easy birdie — his record-tying 32nd birdie of the week — forcing Smith to make the 3.5-footer for the win. That was nothing. Smith had dominated with the flatstick all week long, leading the limited field in Strokes Gained: Putting. He cleaned up what was left and earned a celebratory lei draped over his shoulders.

“Unreal round. Something I’ll never forget, for sure,” Smith said, calling it an intense start to the season. “I was just trying to hit one shot at a time. I know that sounds cliche. We spoke about it earlier in the day. We wanted to get to 35 under. We missed it by one, so in that sense disappointing. But happy to come away with the W.”

The victory is now the fourth of Smith’s young PGA Tour career. And it will down as yet another close-but-no-cigar performance for Rahm. The world-beating Spaniard has amassed a ridiculous 23 top 10 finishes in the last two years, with only three of those counting as official wins. He built up what seemed to be a bullet-proof Player of the Year case last season, only to have it usurped by Patrick Cantlay at the last moment.

When asked about his record-breaking runner-up Rahm said this tournament will have to go be remembered with plenty of context surrounding it. The Els record, as well as the other 30-under scores in Tour history, did not come on as easy a setup as this one.

“It’s kind of weird when you look forward in the records that there’s two of us that beat that score and lost by one and two,” he said. “I know we did a really good job and we shot low, but I think those 30- and 31-unders deserve a lot more credit than my 33-under.”