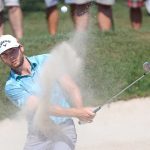 Sam Burns hits a shot on Saturday out of the bunker on the 8th hole on the Copperhead Course at Innisbrook Resort.

Keegan Bradley, on the par-5 14th, floated his second shot over water on the right side of the hole, and it rolled under some trees before settling about 10 yards away from the pin. He had about 15 feet of green to work with, and it sloped back down to the fairway. “This is dead,” the announcer on the PGA Tour Live broadcast said. “Unless you’re Keegan Bradley.” Bradley chipped in. He was down three entering the hole, he’d leave down one, and he’s a co-leader entering the final round. He’s back from the dead. Here are three things you need to know after Saturday’s third round of the Valspar Championship on the Copperhead Course at Innisbrook Resort in Palm Harbor, Fla.

Sam Burns, the other co-leader, would find new life, too.

Burns would then drop an 8-footer for a bogey to stop the bleeding. He and Bradley each shot two-under 69s for a share of a one-shot lead over Max Homa, and a four-stroke advantage over four players.

“I think I played really well,” Burns said. “I got off to a great start. I thought I hit a really good tee shot on 16, it just snuck through the fairway there and just not really a good spot.

“And then 18, I thought that ball was in the fairway. I think it just kicked dead left and then into a bad lie in the bunker and then it plugged on the next one. So I would have taken 5 after seeing where that plugged bunker shot was. So overall I think I played solid.”

Max Homa is a stroke behind

Homa, through two rounds, had made five putts longer than 25 feet, tied for the most from that distance through a halfway point since 2003. He’d add two more on Saturday.

“Everything felt really in control,” he said. “I had my best ball-striking day for sure today. Didn’t hit a ton of greens but just never really — only one time I felt like I was out of position — really struck the ball well, kept making putts. So that’s been fun.”

Four shots behind the leaders are Abraham Ancer, Joaquin Niemann, Cameron Tringale and Ted Potter Jr., and Charley Hoffman is five strokes back.

Potter two-putted the 2nd hole. And the 17th hole. He one-putted every other green.

He’d shoot an eight-under 63, the day’s best round by three shots.

“I hit a lot of good iron shots today, too, to give myself good looks at some birdies,” Potter said. “I had a lot of putts that didn’t have a lot of break to them, so that helped a lot out there.”