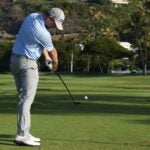 Webb Simpson plays a shot on the 14th hole at Waialae CC during the second round of the 2021 Sony Open.

The 2021 Sony Open in Hawaii — the first full-field PGA Tour event of the new year — continues on Saturday, January 16. You can find full third round tee times at the bottom of this post.

Notable groupings for Sony Open Round 3

If you want to earn your way into the weekend in paradise, you have to go low — really low. Seventy-three players shot 4-under or better through 36 holes at Waialae CC and will continue on this weekend.

Leading the pack is Nick Taylor at 12 under par. Taylor fired a second round of 8-under 62 on Friday, and leads the field by two shots. Taylor, a 32-year-old Canadian, has two PGA Tour victories on his resume: the 2015 Sanderson Farms Championship and the 2020 AT&T Pebble Beach Pro-Am. He’ll play the third round in the final grouping at 5:50 p.m. ET alongside Stewart Cink and Webb Simpson.

But just behind Taylor, Cink and Simpson is a bevy of proven Tour winners, including reigning PGA champion Collin Morikawa, who is three shots back at 9-under. Morikawa will tee it up with Marc Leishman and Charley Hoffman at 5:30 p.m. ET on Saturday. Other notable groupings for the third round include Joaquin Niemann, Hideki Matsuyama and Peter Malnati at 5:20 p.m. ET and Billy Horschel, Brendan Steele and Aaron Baddeley at 5:10 p.m. ET.

Check out the full third round tee times for the 2021 Sony Open in Hawaii below.