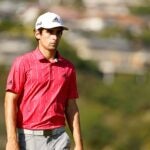 Joaquin Niemann sits just a stroke off the lead on Sunday at the Sony Open.

It’s Sunday at the second event of the 2021 season, the Sony Open, at Waialae Country Club in Honolulu. Here’s everything you need to know to watch the action, including television, streaming and tee time information.

Perhaps the strongest indication of how low scores have been throughout the week at the Sony Open comes from Joaquin Niemann. Through 54 holes, the 22-year-old Chilean is off to a blistering start at Waialae — carding both a 62 and 63 on Thursday and Saturday, respectively, between a Friday 69. Still, Niemann is two strokes off the lead heading into the final round on Sunday.

Niemann trails Brendan Steele, who is seeking redemption after squandering a late lead in last year’s Sony Open in heartbreaking fashion. Steele (-18) holds a two-stroke lead over Niemann and the remainder of the field on Sunday. The 37-year-old is looking for his fourth career PGA Tour victory.

Also in the chase heading into the final round at Waialae are Kevin Na, Peter Malnati and Charley Hoffman. Below you’ll find everything you need to watch Sunday’s final round.

How to watch the Sony Open round 4 on TV

Golf Channel will once again carry live, final round coverage from the final round at the Sony Open. Due to inclement weather in the Honolulu area, tee times have been moved up on Sunday, and the broadcast window has been adjusted accordingly.

How to stream round 4 at the Sony Open

You can stream the final round of Golf Channel TV coverage of the 2021 Sony Open on golfchannel.com. Fans can also view Featured Group coverage of the opening round all day Sunday via PGA Tour Live, though you will need a subscription to access both options.