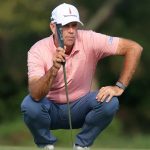 Stewart Cink leaves by five strokes after back-to-back 63s to open the week at the RBC Heritage.

We’ve reached the final round of play at the 2021 RBC Heritage. Below you’ll find everything you need to know to watch the action at Harbour Town on Sunday.

Stewart Cink — sporting his miraculously tanned mug — is firmly in the driver’s seat heading into the final round at the 2021 RBC Heritage after back-to-back 63s to open the week. Cink, age 47, has been on something of a hot streak in recent months following his win at the Safeway Open last September. Cink has five top-20 finishes since that last victory, including at last week’s Masters.

Heading into Sunday at Hilton Head, Cink holds a five-stroke lead over the remainder of the field. Cink’s final-round playing partner is perhaps his polar opposite on Tour: a new-age, young stud by the name of Collin Morikawa. Morikawa enters Sunday at 13 under, five strokes back of Cink after three consecutive rounds in the 60s to open the weekend. On Sunday, he — along with Matt Wallace, Sungjae Im and Webb Simpson — will look to chase down Cink at Harbour Town.

How to watch the RBC Heritage on TV

With a cable subscription, you can watch the 2021 RBC Heritage on Golf Channel and CBS. Golf Channel will provide early-round coverage on Sunday before CBS takes over in the evening. Check out the full TV schedule below.

How to watch the RBC Heritage online, streaming

You can stream the 2021 RBC Heritage online in various ways. You can watch the Golf Channel coverage at golfchannel.com/watch and the CBS broadcasts at CBS.com by logging in with your cable credentials. Another way to catch the action is with PGA Tour Live, which also includes featured group coverage, though you’ll need a subscription to access the stream.