A different kind of Open will unfold this week, but take heart — it’s still The Open 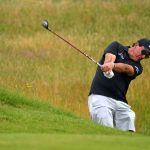 This hurts, filing this little stick of words from our Philadelphia bureau and not from a seaside tent. The first British Open I ever attended, in 1985, was at Royal St. George’s, and this week it’s there again. That’s the lede, buried or otherwise, in any of a hundred stories you might read this week: the British Open is being played. It’ll be a little different, but they’re going to play this thing.

Unfortunately, without Tiger. He’s not been out and about since his February car crash. Also, no Bubba, who withdrew after being exposed to Covid-19, or Zach Johnson, the 2015 winner at the Old Course, who tested positive for the virus. No Ben Curtis, either. The 2003 winner at RSG hasn’t played in an Open since 2016. No Matthew Wolff on the tee sheet. He didn’t cite a reason but he did speak openly about his mental-health issues at last month’s U.S. Open, his return to Grand Slam golf after missing the PGA.

OK, it’s the Open Championship. In truth, across the British Isles, it’s not even that. It’s just The Open, period. The world’s oldest golf championship. And, it says here, the grandest. But here, Stateside, the British Open is totally appropriate upon first reference, and then, simply, the Open after that.

Our Open was won, handsomely, last month, by an Arizonan by way of Spain: Mr. Jon Rahm. Arnold won the Open in 1960. He won two British Opens, and put the event back on the map for millions of Americans. Ben Hogan played in one British Open — and won. (In 1953, at Carnoustie.) Sam Snead played in only four Opens, wining in his first appearance, in 1946, at St. Andrews. Famously, he played in 31 U.S. Opens with 12 top-10s and no wins. Phil kind of knows what that’s all about.

Did you watch the men’s tennis on Sunday, from Wimbledon? Roger Federer and Rafael Nadal each have a record 20 Grand Slam singles titles — and now Novak Djokovic does, too. Djokovic has won the Australian Open nine times, the French Open twice, Wimbledon six times and the U.S. Open three times. Twenty. Big Jack has 18 wins in golf’s four Grand Slam events, the Masters, the PGA, the U.S. Open, the British Open. Our Grand Slam. It’s a term of bridge. Tiger has 15. He and Nicklaus each have three career Grand Slams. Neither has the single-year Grand Slam. Tiger has something every bit as astounding, just not as tidy: the Tiger Slam: the U.S. Open, the British Open and the PGA of 2000, followed by the Masters in April 2001. “Call it what you want,” Tiger used to say. “I got the four trophies on my mantle.”

Everybody knew which four. The four modern Grand Slam events, dominated by the best golfers in the world, virtually all of them professionals, touring and trained.

So here it is, glory’s last chance, to borrow a phrase straight outta Palm Beach Gardens. Our fourth Grand Slam event of 2021. Last year, with an asterisk on the whole thing because of this damn pandemic, only three Grand Slam events were played, each out of its normal calendar slot. This year’s has been better. Next year will be better yet.

Well, ink is practically free these days, here in cyberland. With all due respect to various major golf events — to the Players, to Tiger’s tournament (L.A.), to Jack’s (Memorial), to Arnold’s (Bay Hill), to the British Masters, to the Australian Open, to the Omega Dubai Desert Classic — golf has four majors, four Grand Slam events.

The Ryder Cup is a major golf event. So is the U.S. Amateur. But only four events comprise the Grand Slam. (I’m going to be typing those nine letters a lot more often, from here on out.) And here comes the last of them: the British Open. You know, The Open. Start the coffee, find the remote, put on a jumper, just to get in the mood. It’s going to be cool.