The 2021 Genesis Invitational: 3 things to know after Round 1 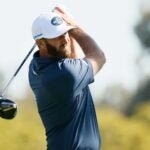 Dustin Johnson is four shots back after the first round at Riviera.

The 2021 Genesis Invitational is packed with talent this year, including the world’s No. 1 player, Dustin Johnson, as well as Brooks Kopeka, Jordan Spieth and Jon Rahm. But it’s one of the Tour’s young guns who holds the lead after the first round. Here’s what you missed from Thursday’s action at glorious Riviera.

Sam Burns, a 24-year-old who first earned his Tour card back in 2019, birdied his final three holes on Thursday en route to a sizzling 7-under 64 — good enough to lead the field by two shots. His closest competitors are Matthew Fitzpatrick and Max Homa, who both shot 5-under 66.

Burns is still seeking his maiden victory on the PGA Tour, but won on the Korn Ferry Tour in 2018. His best Tour finish to date was a T3 at the 2018 Sanderson Farms Championship.

It’s been two weeks since Jordan Spieth first thrilled his legion of fans with his resurgent play, and it appears he’s picking up right where he left off at Riviera.

Spieth has finished T4 and T3 in his last two starts, respectively, and is right back in the mix this week after signing for an opening round of 3-under 68 — just four shots shy of Burns’ lead.

The big names are lurking

Burns will surely be feeling the pressure on Friday given the number of talented players who are right on his tail. World No. 1 and 2017 Genesis champ Dustin Johnson is four shots back at 3-under, as are major champions Francesco Molinari, Keegan Bradley, Brooks Kopeka and Spieth.

Defending champ Adam Scott is also in the mix at 2-under, five shots back.