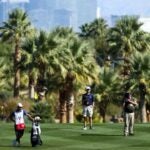 Rory McIlroy is hoping to bag his 20th career Tour victory at the 2021 CJ Cup.

The 2021 CJ Cup @ Summit is one round away from completion, and with a star-studded leaderboard, there’s sure to be some juicy drama down the stretch. You can view full Round 4 tee times for the tournament at the bottom of this post.

Notable groupings for CJ Cup Round 4

The field has had no problem going low this week, with plenty of big names firing rounds in the low 60s. And after third rounds of 63 and 62, respectively, Rickie Fowler and Rory McIlroy are leading the charge. At 21 under overall, Fowler has a two-shot advantage over McIlroy, who is 19 under.

Fowler is hoping to claim his sixth PGA Tour title by snapping a winless drought that dates to his 2019 Waste Management Phoenix Open victory, and McIlroy is itching to bag career win No. 20. The two fan favorites will tee it up in the tournament’s final grouping alongside rising star Abraham Ancer at 2:50 p.m. ET.

But winning on Sunday surely won’t be easy, with seven other players within five shots of Fowler’s lead. Other notable groupings include the penultimate tee time of Robert Streb, Adam Scott and Tyrrell Hatton at 2:38 p.m. ET, and just ahead of them, Keith Mitchell, Cameron Smith and Ian Poulter at 2:26 p.m. ET.

Check out complete final-round tee times for the 2021 CJ Cup below.