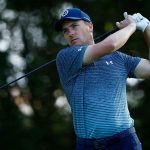 Jordan Spieth's resurgence continued at the first round of the 2021 Charles Schwab Challenge, where he's a co-leader with Sergio Garcia.

The 2021 Charles Schwab Challenge continues on Friday at Colonial CC in Texas. You can find full second-round tee times at the bottom of this post.

Jordan Spieth signed for a tidy, bogey-free round of seven-under 63 on Thursday to co-lead the tournament after the opening round. Spieth’s group mates — PGA champ Phil Mickelson and defending Charles Schwab champ Daniel Berger — will have some work to do on Friday to catch him, with Mickelson posting an opening round of three-over 73 and Berger carding a two-under 68. The star-studded trio will tee it up together again on Friday at 2:06 p.m. ET.

Spieth’s co-leader is another familiar name: Sergio Garcia, who also turned in a clean card that included five birdies, an eagle and zero bogeys, joined Spieth at the top of the leaderboard late in the afternoon on Thursday. Fun fact: Garcia won his very first PGA Tour event at Colonial 20 years ago. He’ll play the second round alongside Ryan Palmer and Kevin Kisner at 9:05 a.m. ET.

How to bet on the Charles Schwab Challenge — risk-free!