While you were sleeping: What you missed in Round 2 of the British Open 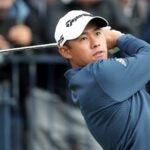 The Open Championship has a new leader.

While you were cycling through stages of REM, many of the finest players in the world were battling over round two at the 2021 Open Championship at Royal St. George’s in Sandwich, Kent, England. As you pour yourself a hot cup of coffee this A.M., here’s a brief recap of what you missed at the Open.

5 things you missed on Friday at the Open Championship

The Open Championship has a new leader, and his name is Collin Morikawa. The 24-year-old has surged into the lead during his second round Friday, recording seven birdies en route to a score of nine under through 15 holes and a three-stroke lead over the field. Morikawa’s iron play has been terrific on Friday morning, with the former PGA Championship winner hitting 90 percent of his greens in regulation through two rounds of play.

Perhaps most impressive of all — Morikawa’s brilliance is coming in only his first-ever Open appearance. His game is a natural fit for the linksland conditions so frequently seen across the Atlantic, where a premium is placed on ball-striking and approach play — two of Morikawa’s greatest strengths — and where driving distance matters less than precision. He’s a surefire favorite heading into the weekend, and is a threat to chase (or best) the single-round major championship scoring record of 62.

Another player whose game would appear a natural fit for linksland golf is Rory McIlroy, but of course, expectation does not always meet reality with the four-time major champion’s game. After a bizarre, butterfly-chasing, even-par opening round on Thursday, McIlroy’s struggles continued on Friday at the Open.

He began the round with a pair of bogeys after a pair of uncharacteristically off-target approach shots. Through the early portion of his round on Friday, he sits at one over, some 10 strokes off the lead and with plenty of work to do to get into contention on the weekend.

Of course, Fleetwood has never won an event on North American soil, but he’s earned a cult-like following among European golf fans for his Ryder Cup exploits and five European Tour victories. The 30-year-old has come close at major championships before, recording runner-up finishes at both the 2018 U.S. Open and 2019 Open Championship, but a win this week would surely mark the biggest of his whirlwind career to date.

4. Who is Daniel Van Tonder?

The biggest surprise atop the leaderboard on Friday wrapped his play well before 7 a.m. ET, and his name is Daniel Van Tonder. Van Tonder, who is making his first major start at the Open, sits tied for second at six under after a second-round 66.

The 30-year-old South African had missed cuts in three of his last four starts prior to the Open, and has only one win on a major professional tour. That said, Van Tonder did go on something of a heater on the Sunshine Tour last fall, at one point winning four of six events between August and September. At the very least, he’s placed himself comfortably into an afternoon tee time on the weekend at the golf season’s final major.

5. What to expect for the rest of Friday

Conditions appear surprisingly gettable for the second consecutive day at Royal St. George’s — as evidenced by Morikawa’s record-chasing round. With winds remaining low and the greens remaining slow, players will have plenty of opportunities to go birdie-chasing at the par-70 layout. Though, it should be stated, that winds and conditions generally grow more difficult as the day progresses, which could be a major advantage for Morikawa and others who have made leaderboard inroads through the early portion of Friday.