Just a few months past his 24th birthday, the 2020 PGA Championship winner is one of the best ball-strikers in golf.

I’ve been lucky enough to work with Collin Morikawa since he was eight years old, so I’ve spent a lot of years watching his swing develop. Even from a young age he’s had a balanced, athletic motion. He’s never swung the club out of control.

As Collin got a little bigger, from ages 13 to 16, he developed a little draw, like a lot of good juniors do. He’d slide his hips a little bit more toward the target, moving the club slightly under plane — he’d have to manipulate the clubface in order to square it up. Once he got a little stronger, we started to work on neutralizing his clubface. We hit a lot of chips and punch shots from 40 yards, keeping the hands passive, the body active and the clubface square. He came out of that process with very good “face awareness,” because he was getting that instant feedback from the ballflight which, after all, is the most important thing in golf.

Notice Collin has a slightly weak lead-hand grip, and he bows his left wrist slightly at the top. It’s not something I’d recommend amateurs copy. But Collin found he was still able to maintain clubface control. That’s the real lesson for all players: Find a matchup that you can sustain. Along the way Collin started hitting a fade. He liked the look of it, we saw the repeatability of it and now he’s known for it. Sure, he’d find a little more distance by switching back to a draw, but why mess with what has made you great? And he can still hit it closer to the pin than you.

Here are six keys to his swing. 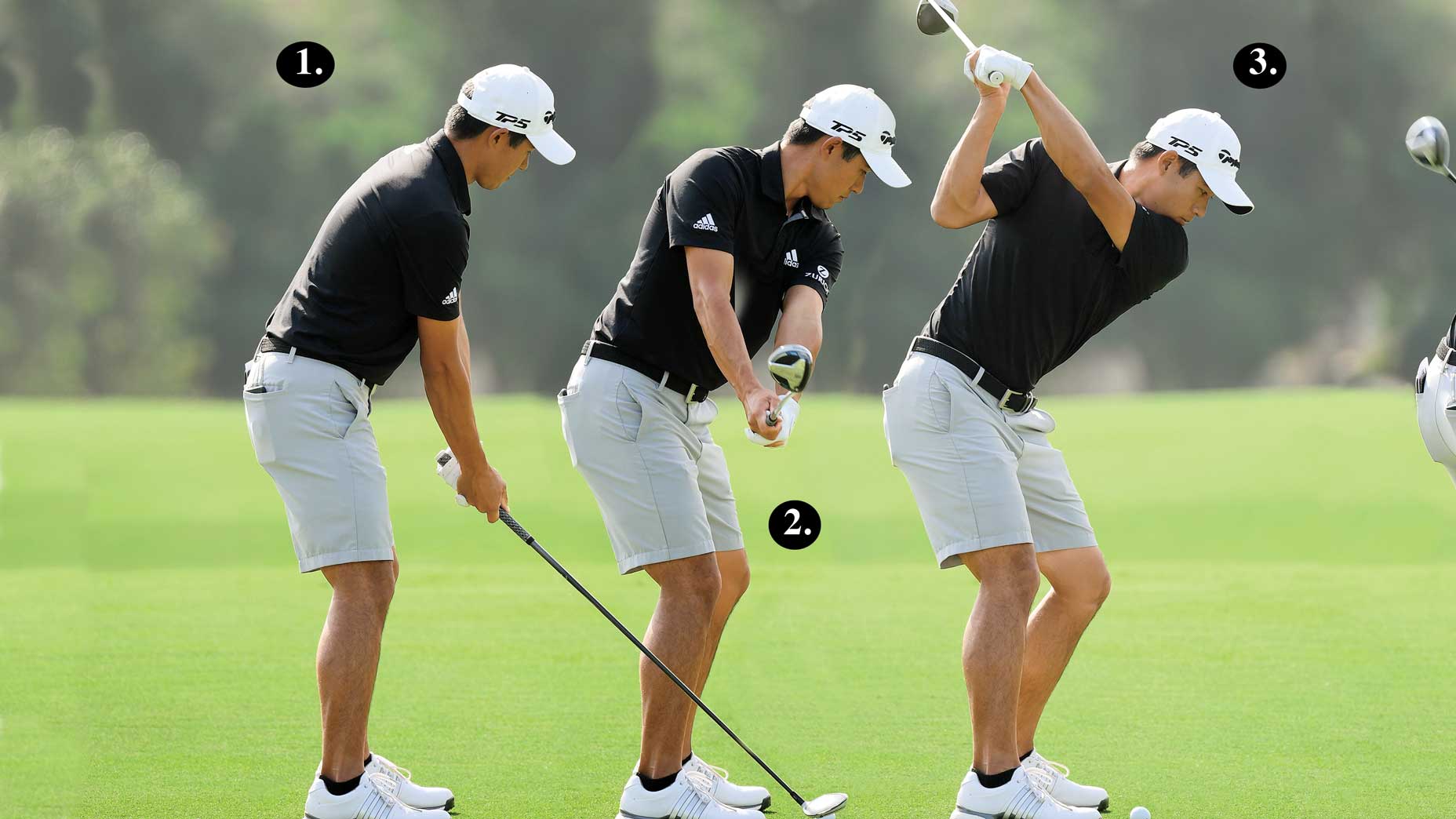 If Collin doesn’t check his posture, he can get a little rounded, which causes some rotational issues on the way back and through. There’s a lot of science that shows that rotation in the spine is going to occur better when it’s straighter.

The deliberateness of Collin’s takeaway started about five years ago, when we worked on rotating to the top of the swing, rather than lifting the club. The triangle formed by the club and his arms and shoulders work together. The club is slightly outside his hands — perfect for his little fade.

Just like on the takeaway, Collin’s arms and body work together as one unit. We talk a lot about connection. His tendency is to move his left arm off his chest. When that happens, the quality of his strike suffers. 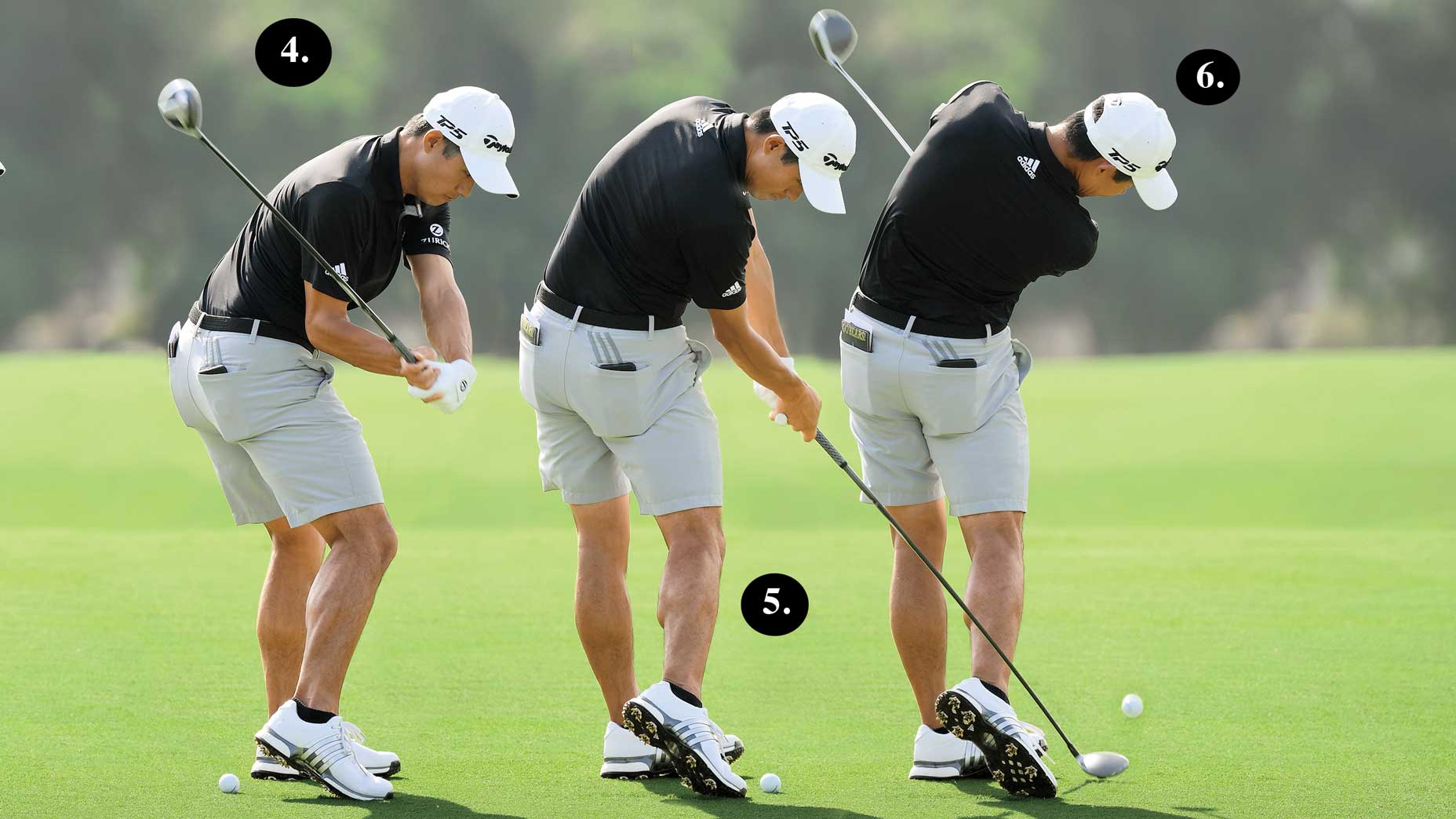 When Collin does get too steep, it’s because he rushes his transition and pulls down too hard with his left arm. That said, I don’t believe in teaching golfers a big “shallow move.” Make it easy on yourself: Check that the shaft lines up with your trail forearm as it is about to do here.

Collin’s lower body has cleared out of the way, his lead wrist is flexed and his sternum is tilted back toward his trail leg. Tilting away from the target like this is especially important for weekend players. Pros are such good athletes they often have too much of it.

Collin’s exit position is a fraction lower than some other guys, which is normal because he prefers to hit a fade. We work a lot on footwork from impact into release. I’m more on the conservative end of that spectrum: I’d rather players stay grounded, balanced and focused on impact quality