Did a butterfly cause Rory McIlroy to drop a shot at the Open Championship? 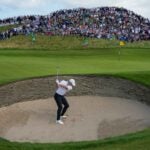 Rory McIlroy hits out of a bunker on Thursday on the 6th hole at Royal St. George's.

Rory McIlroy, on the par-3 6th at Royal St. George’s, hit his tee shot and immediately started to smile. Was it the shot? Hardly. It sailed right during Thursday’s first round of the Open Championship and dropped into the center of a greenside bunker.

Was it the marshal behind him? Nope. The man in the green hat and green jacket had patiently held his lime green marker low, only raising it until McIlroy’s shot was in flight.

Nor was it a fan. But it was in attendance.

“Butterfly,” McIlroy said to caddie Harry Diamond as he walked off the tee.

“Rory McIlroy was bothered by something,” analyst Justin Leonard said on the Golf Channel broadcast.

“Thought maybe it was the marshal raising that early, but it wasn’t,” announcer Terry Gannon said. “Shadows, but he waited.”

After his follow-through, McIlroy whipped around and pointed, and as he walked over to Diamond, he pointed again as the butterfly zipped past. From the bunker, McIlroy would blast out to about 5 feet, then miss the par putt, leading to the second of three-straight bogeys. In search of his first major championship since the 2014 PGA Championship, he shot a over-over 36 on his front nine.

“Yeah, it’s hard to get mad at a butterfly,” Leonard said on the broadcast.

“Yeah, it really is,” Gannon said. “A marshal on the other hand. They’re just trying to help you out.”

Johnny Miller: U.S. Ryder Cup team must do this more than anything to win